How safe US is after 9/11, mixed reactions of democrats 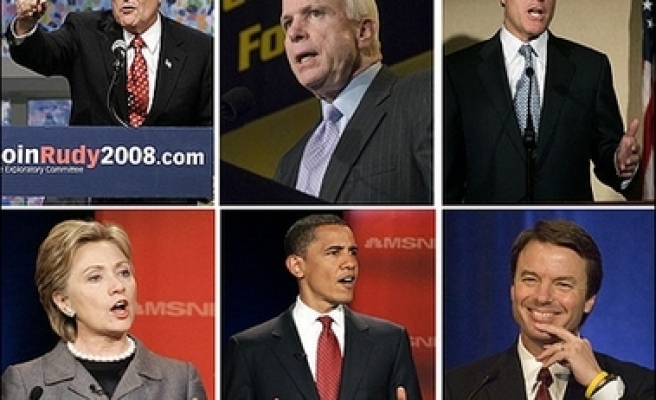 Senator Hillary Rodham Clinton is coming under attack for saying that America is safer now than before 9/11 — contrary to a popular line of argument among some Democratic officials.

In a televised debate on Sunday night, Clinton, who has tried to minimize her differences with her rivals on commander-in-chief issues, bluntly disagreed with a main rival, former Senator John Edwards, who had just said that the administration's so-called war on terror was little more than a slogan.

"I believe we are safer than we were," Clinton said. "We are not yet safe enough, and I have proposed over the last year a number of policies that I think we should be following."

The senator, a New York Democrat, was referring to domestic security efforts since Sept. 11, 2001, and not to the consequences of the war in Iraq or President George W. Bush's foreign policy, her advisers say. Yet rival Democratic campaigns, arguing that the war in Iraq has harmed security in America by breeding terrorists, are using the remark to highlight differences with her on the issue of the ability to be commander in chief, which political analysts view as a threshold issue for any woman running for president.

The campaign of her other chief rival, Senator Barack Obama of Illinois, sent supporters and reporters a memorandum on Monday titled "America Is Not Safer Since 9/11," which cited research from the State Department and other groups that described terrorism as an accelerating threat. Advisers to other candidates, meanwhile, argued Tuesday that Clinton might be misjudging Democratic primary voters, who are loath to credit the Bush administration with much of anything.

Advisers and supporters of Clinton said Tuesday that she was not endorsing the Bush administration's strategy against terrorism, but highlighting the improved efforts of Americans on the front lines to detect and deter terrorist activity since 9/11. They said that Clinton also thought the war in Iraq had been a distraction from the fight against terrorism, but that, day to day, people are safer than they were.

"I think the vast majority of Democratic primary voters, and Americans, would agree with Senator Clinton," said a campaign spokesman, Howard Wolfson. "I think most Americans, for instance, would think that air travel is safer today than on Sept. 10."

Only Clinton's Senate vote in 2002 to authorize military action in Iraq — and her subsequent refusal to apologize for that vote — has created so clear a division thus far in the positions of Clinton, Edwards and Obama. Her remark on Sunday was also a partial departure from the position that many Democrats took with success last fall before the midterm elections, when they argued that the war in Iraq and mismanagement by the Bush administration had left the nation more at risk.

The question of whether the nation is safer than it was before the Sept. 11 attacks is debated passionately among policy makers and security experts. A survey of more than 100 foreign policy experts, conducted in February by Foreign Policy magazine, for instance, found that three-quarters believed that the United States was losing the war on terror.

Some cite the fact that there have been no domestic terror attacks since Sept. 11, and the foiling of several alleged terror plots, as evidence that the new antiterrorism measures are working. They credit the heightened security measures at airports and in cities across the nation, and the revamping of the nation's intelligence agencies.

Others argue that the war in Iraq has diverted resources from the country's efforts to contain Al Qaeda, inspired a new generation of anti-American terrorists and taken the diplomatic focus away from serious threats like Iran and North Korea.

"Hillary's comment is a pretty centrist position, because I think the public is divided between giving the president credit for some steps toward safety, and being very critical of him," said Rand Beers, a national security expert who was an adviser on the Democratic presidential campaign of Senator John Kerry in 2004. "How you talk about the issue is really a cup-half-full versus cup-half-empty choice."

The memorandum from the Obama campaign did not name Clinton, but it represented a rare — if gentle by the terms of political combat — effort to take on one of her positions. Bill Burton, a spokesman for the Obama campaign, said: "It was an important distinction that emerged at the debate. Senator Obama has often made the point that as a result of the war in Iraq, the threat of terrorism has increased."

A spokesman for Edwards, Mark Kornblau, said Tuesday: "George Bush's disastrous foreign policy has made America less safe in the world, according to his own State Department. His long list of failures, topped by the war in Iraq, has left us with more terrorists and fewer allies."

The Clinton campaign noted that Clinton's remark was in line with the conclusions of the bipartisan commission that investigated the Sept. 11 attacks, which found in 2004 that the nation's actions against Al Qaeda abroad and its efforts to improve domestic security had left the nation safer, but not yet safe.

Indeed, her remark echoed one that Bush made in 2004 in a presidential debate against Kerry, when he said: "The 9/11 commission put out a report that said America is safer but not yet safe. There's more work to be done."

Kerry made similar statements, too. In August 2004, for instance, he said that the question of whether Americans were safer since 9/11 was "an easy one," and that the answer was yes. But he also said the greater issue was that the president's foreign policy had made the nation less safe over all.

Yet last year, as Democrats were fighting to reclaim Congress, many argued that the nation was less safe than it had been before the attacks. A group of Democrats including Senator Harry Reid of Nevada, then the minority leader, issued a report in September that they described as "a damning indictment of Bush Republican failure and incompetence that has left America less safe five years after September 11, 2001."

Clinton, too, linked the issue of the nation's safety to Iraq last fall. After parts of a National Intelligence Estimate were released, she said "they confirm what a lot of us feared, that the policies pursued by this administration have not worked and therefore we are breeding terrorists who will not only take aim at us but at our friends and allies."