Taiwan's vice president has pulled out of the race to secure her party's nomination in next year's presidential election, clearing the way for Frank Hsieh, a former premier who says he wants to improve ties with mainland China. 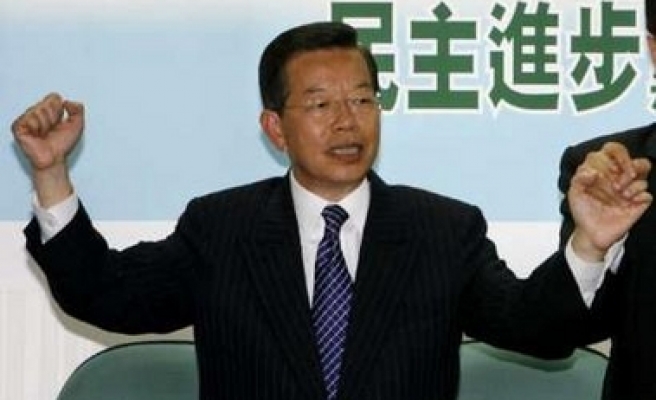 Taiwan's vice president has pulled out of the race to secure her party's nomination in next year's presidential election, clearing the way for Frank Hsieh, a former premier who says he wants to improve ties with mainland China.

Annette Lu announced on Monday she was quitting the contest for nomination by the ruling Democratic Progressive Party (DPP) after she came last in the first of two primary votes on Sunday.

Two other candidates for the nomination withdrew from the race late on Sunday, including the current premier, Su Tseng-chang, who had been a hotly-tipped favourite.

In Sunday's vote, Hsieh grabbed 44.66 per cent of ballots cast by DPP members while Su secured just over 33 per cent.

Lu had earlier said she would go through to the second round despite her poor standing in Sunday's vote, but by early on Monday she reversed her decision.

Mr Hsieh visited me last night," she said. "He was very sincere and we chatted happily. I decided to help him achieve his goal."

Her decision means the party has now abandoned the second round of the selection process.

No one else from outside the DPP and Kuomintang has so far declared their candidacy.

Chen Shui-bian, Taiwan's incumbent president, is stepping down next year after his second and final four-year term.

Chen himself urged unity as he cast his vote on Sunday for his potential successor, warning that mudslinging could harm the party's chances of retaining the presidency.

During his time as Taiwn's premier, Hsieh sought argued for engagement with China and a gradual opening of economic links, contrasting with Chen's more pro-independence stance, promoting eventual sovereignty for the island and tightly controlled trade and investment links.

China, which views Taiwan as a renegade province to be retaken by force if needed, has far refused to deal with Chen's pro-independence government. Last Mod: 07 Mayıs 2007, 16:07
Add Comment