A major dust storm has developed on the red planet, blocking sunlight and prompting Mars mission managers to keep a close eye on it. 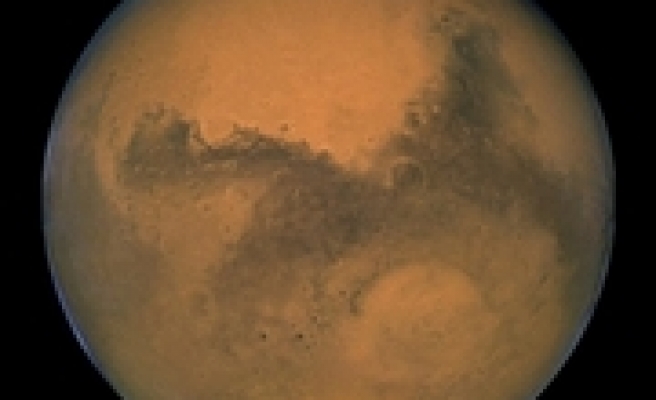 It is not known how large the storm might grow, but already it is thousands of miles across. If it balloons, as dust storms have done in the past, it could hamper operations of NASA's Mars rovers Spirit and Opportunity.


For now, officials don't think the storm will threaten rover operations, however. In fact, the windy conditions on the planet have blown off large amounts of dust from the rovers' solar arrays, giving them more power. The power boost may lend a helping hand to the Opportunity rover, should officials decide to send it into Victoria Crater.


"We've been watching this storm for about six days now," said Steven Squyres of Cornell University, who is the lead scientist of the Mars Exploration Rover Project. "It's not unheard of for Martian dust storms to cover half the planet, and this one is now a regional storm."


Squyres wasn't certain of the storm's exact size, but said it appears to be thousands of miles in diameter and "ain't no little hurricane." In fact, "it's one of the most sunlight-blocking storms we've seen on Mars," he said.


According to reports from the Mars Reconnaissance Orbiter, which Squyres deemed as Mars' weather satellite, the storm has grown in size and is lifting up dust about 560 miles (900 KM) east of Opportunity, which is presently at Meridiani Planum. "The Mars Reconnaissance Orbiter team is watching this closely, because we worry about dust in the atmosphere obscuring the sunlight," Squyres said.


Experienced amateur astronomers have spotted the storm with large telescopes. Paul Maxson of Phoenix, Arizona, was one of the first to image the storm.


Dust storms on Mars occur regularly, but seldom do they grow beyond regional proportions. A storm in 2001, however, engulfed the entire planet in red dust.


"If the storm continues to get worse, it could cut into our activities," Squyres said. One of those activities, should the team decide it's not too risky, could be the descent of Opportunity into the massive Victoria Crater. A press conference is planned for Thursday to discuss the decision.


"The upshot of all this wind is that the arrays are so clean that the dust is insignificant right now," he said. "But this is Mars, and we can't predict the weather-we can only to react to it."


Diana Blaney, the deputy project manager for the Mars exploration rovers at NASA's Jet Propulsion Laboratory (JPL) in Pasadena, California, said dust levels can significantly impact the rovers' missions. "When big dust storms like this come along, they decrease the energy the rovers can work with," Blaney said.


JPL spokesperson Guy Webster said Mars mission managers will be monitoring the storm's progress and how it may affect the planned descent into the crater. "They've really been paying attention to the storm and been getting regular reports of its progress," Webster said.

Visit SPACE.com and explore our huge collection of Space Pictures, Space Videos, Space Image of the Day, Hot Topics, Top 10s, Multimedia, Trivia, Voting and Amazing Images. Follow the latest developments in the search for life in our universe in our SETI: Search for Life section. Join the community, sign up for our free daily email newsletter, listen to our Podcasts, check out our RSS feeds and other Reader Favorites today!