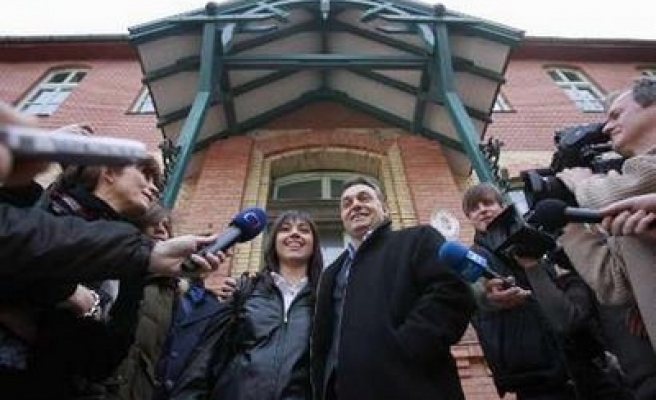 Opposition Fidesz party leader Viktor Orban said that the coalition, which has run Hungary since 2002 and won re-election in 2006, was no longer capable of governing.

"What we have here is the classic case of ... a lame duck government, the operation of the country is paralysed and it is falling apart," Orban told reporters on the sidelines of a party meeting on Sunday.

"We must have early elections. When and how I don't know yet, but it is inevitable," Orban said. The next election is not due until 2010.

The coalition's fate hinges on whether the Free Democrats decide on Monday to accept Gyurcsany's retreat on reforms and his bid to redraw an agreement governing the coalition.

Gyurcsany announced on Saturday that Free Democrat Health Minister Agnes Horvath would be sacked and that the smaller party's signature reform, introducing private money into state health insurance, would be diluted.

Gyurcsany's move came after a defeat in a referendum this month in which almost a million Socialist voters sided with the opposition to strike down parts of his reform agenda.

Even if the Free Democrats do desert the Socialists, it is possible that some of the party's 20 MPs could be tempted to join the larger party. The Socialists have 190 seats in parliament, only four short of a majority.

Right-of-centre Fidesz has a big lead in opinion polls. A recent Gallup poll put them on 43 percent, the Socialists on 15 percent and the Free Democrats on just one percent.

If an election were held now the Free Democrats would not clear the 5 percent threshold to make it into parliament and political analysts say that may hold the two parties together.

No Hungarian government in the post-communist era has quit before the end of its term.

The government rejected Orban's call for an early vote.

"Viktor Orban has been talking about early elections ever since the 2006 elections. With the deepest respect and regret I have to say that the next elections are due in 2010," government spokesman David Daroczi said.