I am 'not a mediator' in nuclear row: Assad

Assad said Syria's aim was to "first understand the Iranian position and then outline if there is any possibility of playing a role or not." 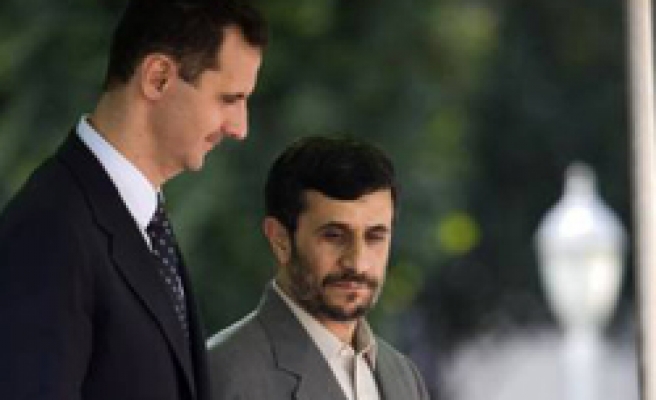 Syria said on Sunday it was not mediating or bringing a message from the West to Iran over its nuclear program but could play a role to help defuse the row in future.

Syrian President Bashar al-Assad made his comments during a two-day trip to Iran that followed a visit to Paris in July when he told French President Nicolas Sarkozy he would use his good ties with Tehran to help resolve the atomic stand-off.

Assad told a joint news conference with Iranian President Mahmoud Ahmadinejad that he was "not a mediator and not an envoy and not carrying a message from any Western official".

Assad said Syria's aim was to "first understand the Iranian position and then outline if there is any possibility of playing a role or not."

"It is too early to outline this role before we hear other views from Western parties," he said, adding Syria believed strengthening dialogue was the only solution to the row.

Assad said he had told French officials that Syria's position in the dispute was based on international law and the right of Iran and any country to use peaceful nuclear energy.

Western officials gave Tehran two weeks from July 19 to respond to their offer not to impose more U.N. sanctions on Iran if it froze any expansion of its nuclear work.

That suggested a deadline of Aug. 2 but Iran, which has repeatedly ruled out curbing its nuclear activities, dismissed the idea of having two weeks to reply.

A joint statement said Syria and Iran discussed a range of regional issues such as the situation in Lebanon and Iraq, as well as other topics like the nuclear dossier.

"For some time now we have said that we are always ready to negotiate, to talk, but the issues that need to be discussed are numerous," Ahmadinejad told the news conference in comments translated by the English-language Press TV.

"We submitted a proposed package to Western countries and they submitted their own package of proposals to us," he said.

Iranian officials have previously said they are awaiting a reply from the six powers -- the United States, Britain, France, Germany, Russia and China -- to the Iranian ideas.

Syria and Iran have been bound with a strategic coordination agreement since more than 20 years ago. The two countries closely cooperation at diverse levels.