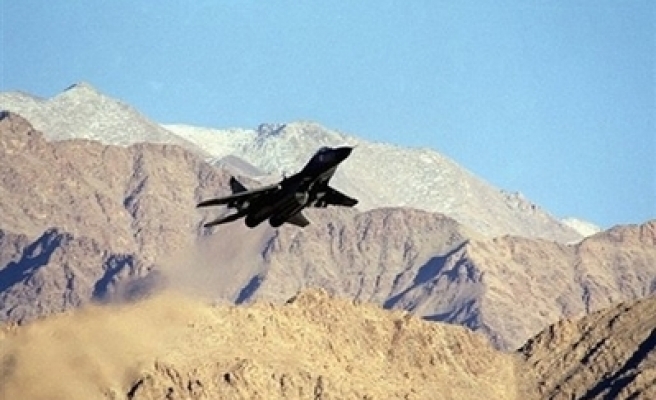 The two post-Cold War allies Saturday signed the deal to extend the life of India's fleet of 70 MiG-29 jets another 15 years from their current 25 years, an air force official said.

"The project entails two to three years and only six of them would be re-fitted in Russia while the work on the remaining squadrons would be carried out by them at Indian bases," he said asking not to be named.

The pre-condition was a "precaution" against delays in the modernisation of the MiG-29s which are among the main combat planes in India's inventory.

"We learnt our lessons with the MiG-21 project," he added, alluding to years of delay in the promised upgrade by Russia of the jets, now labelled "flying coffins" and "widow-makers" because of frequent crashes due to engine failure.

Under the contract Russia will re-arm the twin-engined MiG-29s with air-to-air missiles, modern bombs, increased fuel capacity and the latest avionics, the contract said.

The MiG-29 deal came after India last month resolved a protracted dispute with Russia on the sale of the Soviet-era carrier Admiral Gorshkov to the Indian navy.

The two sides buried the hatchet after India agreed to pay 900 million dollars more for the 30-year-old carrier which will now join the Indian navy in 2011.

Gorshkov is to fill a vacuum left by the scrapping in 1997 of India's first aircraft carrier, INS Vikrant, which had been in service since 1961.

The Indian navy has only one operational aircraft carrier, the INS Viraat, which is to be phased out in coming years.

Russia accounts for 70 percent of Indian arms supplies but late deliveries and commercial disagreements have led New Delhi to use other suppliers such as Israel, Britain, France and the United States.

Russia is in a race with Western rivals for a 12-billion-dollar deal to sell 126 fighter jets, artillery worth two billion dollars and 317 helicopters worth a billion dollars to India.

US and European military aircraft manufacturers have emerged as the forerunners to win the fighter deal which will enable India to junk the crash-prone MiG-21.