Passenger train services between India and Bangladesh were restored on Monday, more than 40 years after direct train links were suspended between the neighbours following the 1965 India-Pakistan war. 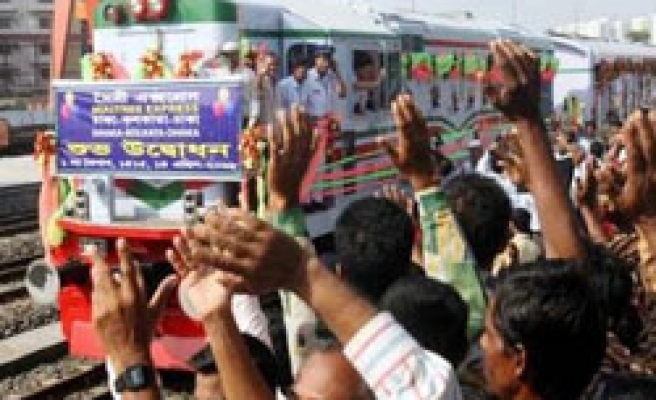 The "Moitree (Friendship) Express" train between India's eastern Kolkata city and the Bangladeshi capital Dhaka was flagged off by India's Foreign Minister Pranab Mukherjee, in a colourful ceremony coinciding with the Bengali New Year.

Bedecked with flowers, the six-coach train carrying 250 passengers began its 500-kilometre journey to Dhaka after Mukherjee gave a signal through remote control.

The minister described it as a "historic and memorable" day for both countries and thanked the railway authorities for resuming the service that he said would bring the neighbours closer.

But the train was briefly stopped in the Nadia district bordering Bangladesh when about 50 protestors demanding help for Bangladeshi refugees squatted on the train tracks.

Security forces on the train got down when it stopped, but did not have to use force against the squatters who lifted the blockade of their own, the PTI news agency reported.

Railway officials said the Moitree Express will be a twice-weekly service. It will leave Kolkata for Dhaka on Saturday and Sundays. The Indian service will have a capacity for 368 passengers while the Bangladeshi can will accommodate 418 passengers.

The service was suspended following the 1965 war between India and Pakistan, of which Bangladesh was the eastern part. Bangladesh gained independence in 1971 but it was not until 2001 that India and Bangladesh began steps to resume the train link.

Railway officials said that the common history, culture and language of Bengalis on both sides of the borders had generated a demand for the regular train service.

Many Bengalis who live in India's West Bengal state, said they would visit their native villages in Bangladesh.

"It is my homeland. I was born in Bangladesh and studied in Dhaka university. I also served as a principal in a school before we moved to India," a passenger told the Headlines Today news channel.
Last Mod: 14 Nisan 2008, 12:58
Add Comment