The balance of power is held by the regional Samajwadi Party which said its 39 lawmakers will back the government as it tries to cross the majority mark of 272. Even then, the government still needs around seven votes from smaller parties. 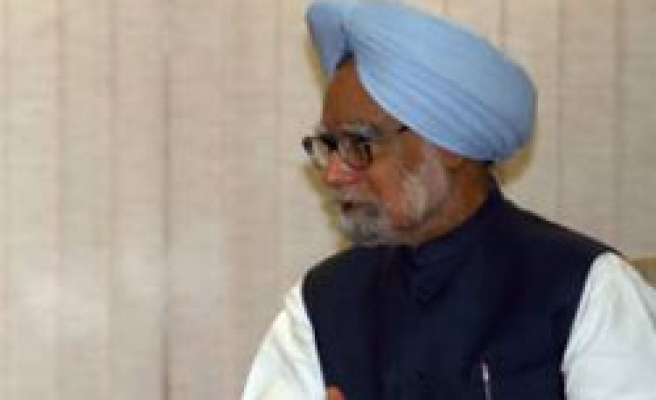 India's government will announce the date for a confidence vote on Friday as it fights for survival after its communist allies withdrew their support to protest against a U.S. nuclear deal.

A regional party has stepped in to replace the communists who opposed the deal as harmful for India, but Prime Minister Manmohan Singh's government still needs the support of smaller parties and independent lawmakers to survive the confidence vote.

The government will fall if it loses the vote, triggering early elections and damaging chances of the deal going through.

The vote is widely expected to take place within two weeks.

Trying to cobble a parliamentary majority, government allies were closeted in meetings on Friday with potential supporting parties, many of who are keen to avoid polls at a time when inflation is at a record high.

"We are meeting our potential allies," a spokesman for the Congress party, which heads the ruling coalition, said.

"Then our party leadership will decide on the date and communicate it to the president."

The government's worries have been compounded by vacillation among some of its long-standing partners who are worried supporting a pact with the United States may alienate some voters ahead of national elections next year.

The balance of power is held by the regional Samajwadi Party which said its 39 lawmakers will back the government as it tries to cross the majority mark of 272. Even then, the government still needs around seven votes from smaller parties.

"I think the government will survive the confidence vote, perhaps with around a 10-vote margin," said political commentator Kuldip Nayar.

India's main stock exchange fell last week in part due to the political uncertainty, and has largely see-sawed as much on the news of the exit of the communists as global economic factors.

The nuclear deal, which will help open up the international nuclear trade to India, will unlock an energy market worth some billions of dollars for major European and American nuclear firms.

But before that India and the United States must win clearances from U.N. atomic watchdog governors and a 45-nation group that controls sensitive nuclear trade, then ratification by the U.S. Congress for the deal, agreed in 2005, to take force.

India took the first step toward implementing it on Wednesday by submitting a draft plan for inspections of its civilian nuclear reactors to the watchdog International Atomic Energy Agency's (IAEA's) 35-nation Board of Governors in Vienna.

The move has invited criticism from the former communist allies and the main Hindu nationalist opposition which say a minority government did not have the moral authority to move on an international agreement.

The IAEA announcement that India had submitted the nuclear accord came despite Foreign Minister Pranab Mukherjee saying on Tuesday that India would seek approval from the nuclear watchdog only after the vote of confidence.

"We suspect a conspiracy is afoot to present the country with a fait accompli by rushing the deal through behind closed doors," said L.K. Advani, leader of the main Hindu nationalist Bharatiya Janata Party.

"It turns out those who were raising a storm over the dilution of national sovereignty with the pact needn't have bothered," the Times of India said in an editorial on Friday.

Some critics also see loopholes in the draft agreement, citing a clause suggesting India could cancel the deal if foreign fuel supplies were cut off in response to an act such as a nuclear bomb test by India.