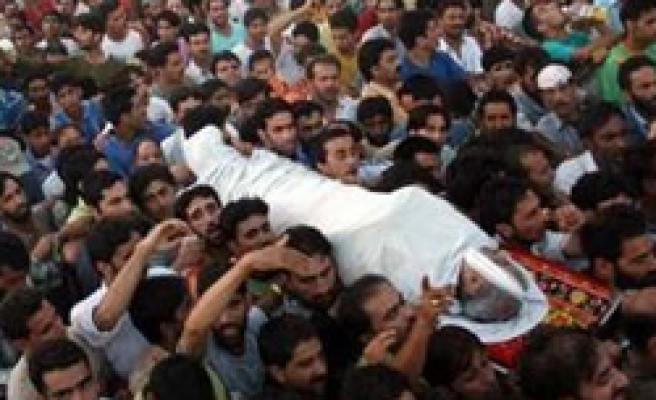 Indian police shot dead at least 14 people in Kashmir on Tuesday as huge demonstrations against an economic blockade by Hindus roiled the region, officials said.

As a result of Hindu blockade, traders in Kashmir are trying to sell their goods in neighbouring Pakistan.

The protests have widened to become pro-independence rallies, some of the biggest since in the region 20 years ago.

On Tuesday, some 20,000 Muslims opposed a curfew in Bandipora, about 60 km (40 miles) north of Srinagar, Kashmir's summer capital, to protest against Monday's killings.

"Security forces opened fire and killed three of them," Nizam Ahmad, an official from Bandipora, said.

"Sheikh Aziz's death is big loss to Kashmir nation, we will take his mission to its logical end," said Mirwaiz Umar Farooq, chairman of Hurriyat.

Indian authorities denied any economic blockade and say lorries, guarded by policemen and soldiers, were plying the region's main 300-km (185 mile) highway, the only surface link between Kashmir valley and the rest of India.

In Jammu, shops were shut down by Hindus, as the protests entered the 43nd day.

Muslim traders say the Kashmir valley was running short of essentials, including fuel and medicine while fruit-growers say their produce bound for markets in Indian cities was rotting.

"We have suffered a loss of at least 20 million rupees (about $475,000) since this agitation began," said Mohammad Yousuf, president of Kashmir Fruit Growers Association. "And if the blockade continues it will be a disaster for us."

The dispute began after the Kashmir government attempted to give Muslim forest land to Hindu pilgrims.

The government then backed down from its decision.