Officials said the number of pilgrims had risen sharply on the weekend at the Naina Devi temple, overwhelming security personnel. 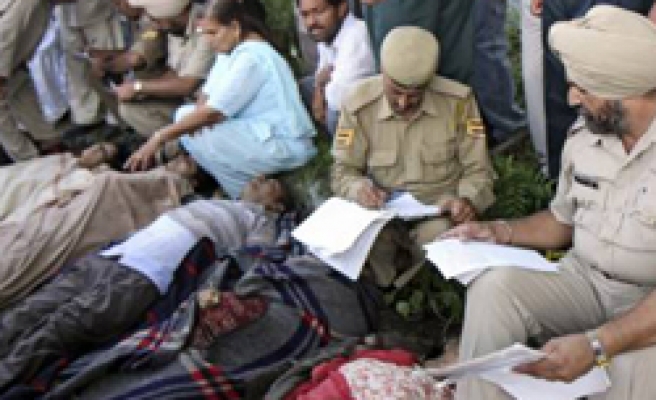 Indian authorities on Monday ordered a probe into possible organisational lapses that led to a stampede outside a mountaintop Hindu temple in northern India, killing at least 145 pilgrims.

Rumours of a landslide triggered a stampede on Sunday by pilgrims who ran down a narrow mountain trail from the temple in Himachal Pradesh state, only to meet thousands of people walking up in the opposite direction.

Most were trampled while dozens fell to their death after railings broke on the steep mountainside. More than 100 people were injured.

Officials said the number of pilgrims had risen sharply on the weekend at the Naina Devi temple, overwhelming security personnel.

"There are two routes leading to the temple and the barricades put up to streamline human traffic broke down and in the melee everything went haywire," Rakesh Kapoor, a senior government official, told Reuters.

"It was raining very heavily and the crowds had swelled immensely and as soon as the rain stopped people tried to rush ahead," Kapoor added. "Then rumours of a landslide started the stampede."

Thousands of worshippers had gathered at the temple in Bilaspur district, some 150 km (95 miles) north of the city of Chandigarh, during an annual festival.

At least 40 children and 45 women died in the stampede, police officers said.

Those who survived saw people jumping to their death from the hill, in a desperate attempt to save themselves from the stampede.

"There was a man with his child and he was shaking the child to see if he was alive, and all the time tears were flowing down his cheeks," survivor Vindo Bala, 52, told Reuters on Monday.

In India, stampedes are not uncommon at temples, where thousands of people often gather to pray during festivals.

"No one from the police or administration was helping and it was just people helping each other in the pouring rain," Bala said.

Witnesses said people were carrying their dead or seriously injured relatives on makeshift slings made from torn clothes.

Victims and their relatives said clinics were short-staffed and did not have enough medicines to treat the injured.

"I am so shocked that I am trembling in my house and terrified to step out and go to work," Wadhera added.

Temple officials said the festival will continue. It is due to end on Aug. 11.