An Indian pop star and Bollywood music composer created a furore after he visited a Muslim shrine disguised in a black burqa to avoid being mobbed by fans, newspapers reported on Thursday. 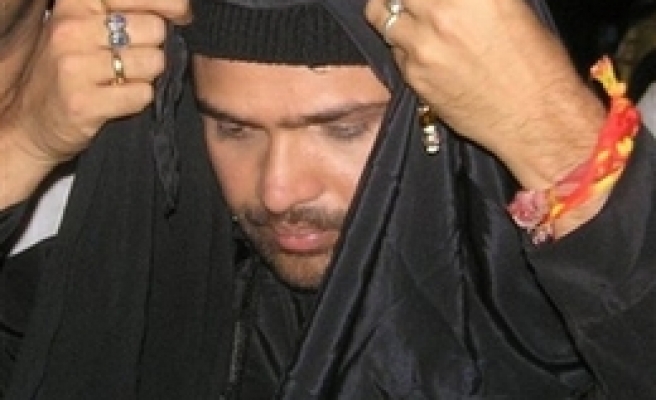 An Indian pop star and Bollywood music composer created a furore after he visited a Muslim shrine disguised in a black burqa to avoid being mobbed by fans, newspapers reported on Thursday.

Himesh Reshammiya visited the shrine of the 13th century Sufi saint Khwaja Moinuddin Chisti to seek blessings for his debut film “Aap Kaa Surroor” (Your Intoxication), which is to be released on Friday.

An official of the shrine had advised the singer to wear the burqa so that he could enter the famous shrine in Ajmer in the western state of Rajasthan without getting mobbed.

Newspapers showed pictures, which they said were of him, covered head-to-toe in black.

The Times of India said the 33-year-old Reshammiya, a Hindu, had tried to enter the shrine on Tuesday in normal clothes but was blocked by swarming devotees and fans.

The president of the shrine committee, Peerzada Sibli Qasim said in The Hindustan Times that Reshammiya was “ridiculing Muslim religious tradition”.

Reshammiya said he was sorry if he hurt anyone’s sentiments.

“If I have committed a mistake, I apologise for it,” the Times of India reported the singer as saying.

It is not uncommon for Hindus to visit Sufi shrines in India for blessings.

Last year, Bollywood star Katrina Kaif stirred anger among some religious leaders when she wore a knee-length skirt while inside the Muslim shrine, which attracts hundreds of people a day who seek the Sufi saint’s blessing.
Last Mod: 28 Haziran 2007, 14:24
Add Comment