India's economy depends on the millions of elaborately decorated trucks that ply the nation's roads, and so a prolonged strike would likely add to the woes of an already beleaguered government. 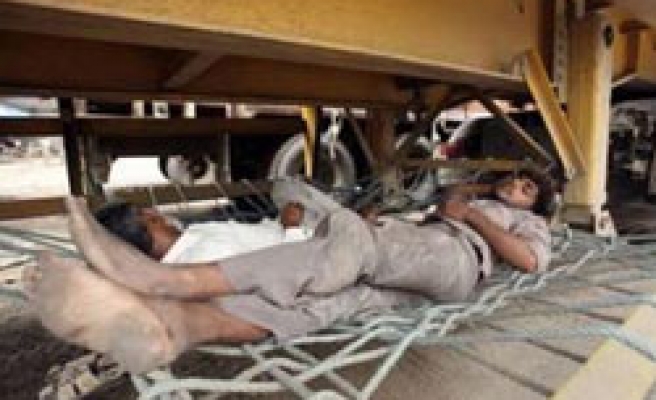 Truckstops across India were at a standstill on Thursday as many lorry drivers nationwide staged a strike over rising fuel bills, raising fears that it could force up food price and dampen commerce.

The strike has been low-key so far -- striking truckers seem to be spending more time resting than shouting in the street -- and the impact is only just beginning to be felt, mostly by those who like to buy mangoes, pomegranates and bananas.

The cost of fruit and vegetables rose between 10 and 30 percent in wholesale consumer markets, traders in Delhi said, although Mumbai prices remained stable.

India's economy depends on the millions of elaborately decorated trucks that ply the nation's roads, and so a prolonged strike would likely add to the woes of an already beleaguered government.

The ruling coalition is facing inflation at a 13-year high and the grim prospect of losing vital support in parliament from its communist allies over a nuclear deal with the United States.

Companies reliant on road transport are also worried about a prolonged action.

"If the strike continues, it will affect us," said Nittin Johari, the chief financial officer of Bhushan Steel Ltd. "It's only been two days now so at least for one week there wouldn't be much impact. But after that our sales may be affected."

Union leaders say nearly 5 million trucks are staying off the road, but it is not possible to independently verify that figure. Several large transporter organisations in West Bengal, Kerala and other states said they were not taking part.

Charan Singh Lohara, president of the All India Motor Transport Congress, met with transport ministry officials on Wednesday but said he was unhappy with the talks.

He says fuel retailers have been forcing commercial vehicles to meet half of their fuel consumption through costlier branded diesel.

The ministry says it is trying to solve at least some of the truckers' problems. Lohara says the strikes will continue.

Some feeling the pinch

Kerala, a crowded thin sliver of a state along the south Indian coast, depends on its neighbours for most of its staple foods, and so is feeling the pinch sooner than most.

"Prices of vegetables, fruits, meat and eggs have already gone up," said T. Nazrudeen, president of the state's biggest traders' body. "We never expected that the strike will take place. Therefore we did not stock the commodities. The present stock will run out in four to five days."

He said the 12,000 trucks which ferry in food worth $273 million from other states on an average day were nowhere to be seen.

K.R. Jyothilal, the state's civil supplies secretary, said he could assure the supply of rice and pulses, but fruits, vegetables and other perishable goods could become more expensive.

The number of interstate trucks entering the metropolis of Kolkata has halved, according to the local truck operators' association, cutting off supplies of the north Indian mangoes and south Indian fish of which Bengalis are particularly fond.

Truckers groups in Rajasthan, like several states, have exempted drugs, milk and other essential commodities from the strike.

A similar week-long strike in August 2004 pulled monthly diesel sales down 9.3 percent from a year earlier and hurt annual growth in industrial output because of disrupted shipments.