Indonesia's communication minister said he had written to the YouTube video sharing website asking it to remove the film. 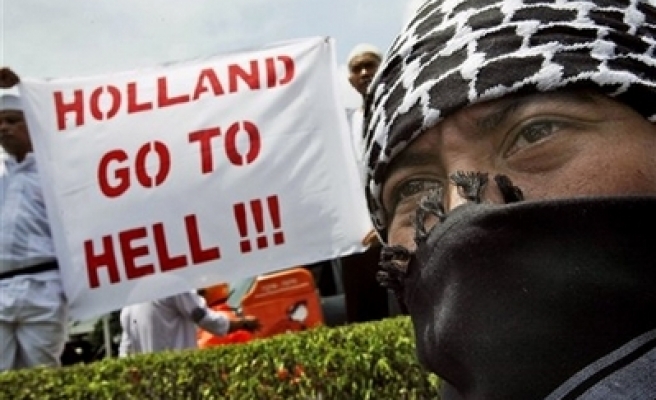 Indonesia's president and barred the far-right Dutch lawmaker behind an anti-Islamic film from entering the country.

President Susilo Bambang Yudhoyono also said the screening of "Fitna", which has sparked several protests here since its release on the Internet last Thursday, would be banned in the country.

"I am asking (Indonesians) not to engage in actions such as destruction, violence and sweepings (harassing foreigners), because Islam and the other religions forbid violence and it is also against the law," Yudhoyono told journalists late Monday.

The 17-minute film features imagery of the attacks on New York in 2001 and Madrid in 2004 combined with quotes from the Koran, Islam's holy book, and has been called "offensively anti-Islamic" by UN Secretary General Ban Ki-moon.

Dozens of people protested outside the Dutch embassy in Jakarta amid heavy security on Monday, chanting anti-Dutch slogans and throwing eggs and water.

The Muslim group Hizbut Tahrir is planning a second demonstration there Tuesday morning.

Indonesia's communication minister said he had written to the YouTube video sharing website asking it to remove the film, while Yudhoyono said he had issued a ban on its maker, Geert Wilders, entering the country.

Indonesia is the world's largest Muslim nation with some 90 percent of its 230 million people following Islam.