Yudhoyono, a former general who won the country's first direct presidential election in 2004, has not said if he will run for another term but is widely expected to do so. 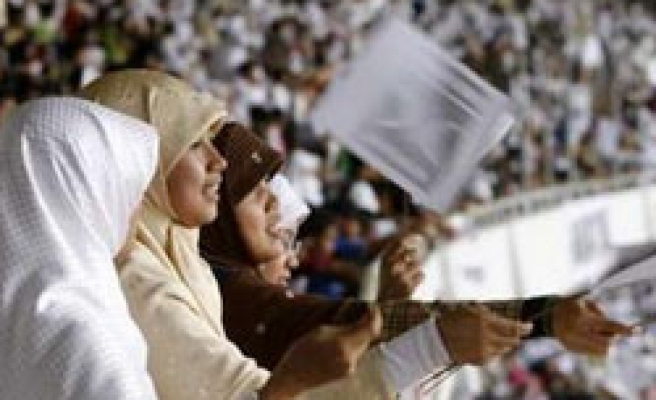 Indonesia started campaigning on Saturday evening for parliamentary elections next year, as a recent poll showed a drop in support for the two main party's in the ruling coalition after a fuel price hike in May.

The 34 parties approved to contest the April 9 election had been asked to pledge to campaign peacefully, said Andi Nurpati Baharuddin of the election commission.

"All types of campaigning is allowed, except mass gatherings in open spaces, because that will only start three weeks before the election day", said Baharuddin.

She added the parties would not be allowed to conduct "black campaigning" -- using money to attract supporters or campaigning in hospitals, government buildings and places of worship.

The use of cash handouts is common during campaigning in Indonesia, where supporters are often paid to attend rallies for political parties.

A survey by private pollster Indo Barometer conducted last month showed the popularity of the Golkar party, the main party in the ruling coalition, had slumped to 12 percent of voters compared with 18 percent in the same poll in December 2007.

Golkar won the 2004 parliament election and has 127 seats in the 550-member house, while the main opposition party, led by former president Megawati Sukarnoputri, has 109 seats.

Megawati, an iconic opposition figure in the dying days of former president Suharto's autocratic regime and president before the incumbent Susilo Bambang Yudhoyono, plans to stand in the 2009 presidential election.

The poll showed support for Yudhoyono's Democratic Party had also slipped below 10 percent since his administration lifted fuel prices by an average of nearly 30 percent in May, prompting protests.

Yudhoyono, a former general who won the country's first direct presidential election in 2004, has not said if he will run for another term but is widely expected to do so.