Indonesia forests are disappearing at a rate faster than anywhere else on Earth, Greenpeace has said, describing the issue as a "national shame". 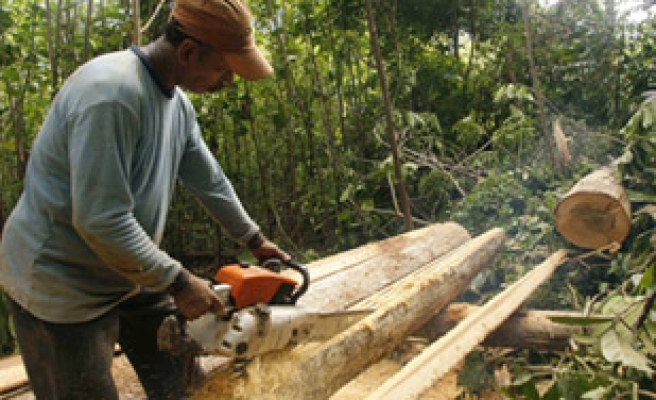 Logging, fires and land clearing for palm oil plantations are all decimating the country's forests, the environmental group said, with an area equivalent to 300 football pitches destroyed every hour.

Bustar Maitar, Greenpeace Indonesia's forest campaigner, said there would soon be no forest left if the government fails to rectify the situation.

The announcement comes a day before climate change scientists are due to release the last of three global warming reports in Bangkok, Thailand.

Presenting its report on Thursday Greenpeace urged the Indonesian government to temporarily ban all commercial logging to allow forest re-growth.

Environmental groups have long accused Indonesian authorities of failing to control lawlessness and corruption in the forestry sector.

Indonesia's forestry ministry did not contest the figures but said the government had been "doing our best to slow down the rate".

It said several conservation initiatives had been launched since 2003 including signing agreements with Japan and the European Union banning the import of illegally logged products.

"We are very concerned," a spokesman said.

An estimated 1.8 million hectares of forest were destroyed each year between 2000 and 2005, a rate of two per cent annually or 51 square kilometers a day, said Hapsoro, the group's Southeast Asia forest campaigner.

"It is a national shame for Indonesia to own this distinction in the record books," he said. "This is tragic."

Greenpeace said international demand for timber and paper as well as commodities such as palm oil was driving the destruction of about 120 million hectares of forest area.

Indonesia is poised to overtake Malaysia as the biggest palm oil producer this year.

While Indonesia had the fastest deforestation rate, Greenpeace said Brazil destroyed a larger area of forest every year.

Indonesia is the third-largest greenhouse polluter after the United States and China, according to the group.

Indonesia wants rich countries to pay developing nations to preserve their forests and plans to push this proposal at a UN conference on climate change in Bali in December.