This issue of Insight Turkey examines the relationship between identity and foreign policy with special reference to Turkey, Greece, Germany and Japan. 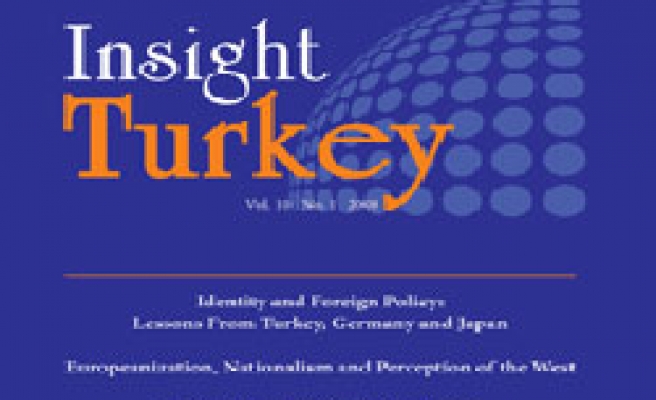 Insight Turkey, in its 10th volume, is out with a new design. We hope you will like it. We also continue our quest to improve journal's content with original articles, commentaries and book reviews.

As a peer-reviewed journal, Insight Turkey is now covered by major indexing and abstracting systems. This will certainly contribute to the quality of articles submitted and eventually published. Our claim still stands: Insight Turkey is a key source to understand Turkish politics, Turkish foreign policy and its adjacent regions.

This special issue of Insight Turkey opens with a lengthy article by Hasan Kosebalaban who applies a constructivist theoretical framework to assess the impact of national identity on Turkish and Japanese foreign policies with an historical depth.

In the following article comparing Turkey and Germany, Birgul Demirtas - Coskun elaborates on the impact of systemic changes on state identity debates. She argues that although the end of the Cold War gave way to a new round of identity debate in Turkey and Germany both retained the former identities they had constructed during the Cold War. Demirtas explains persistence of the old identities in term of their socially well-established character and rational calculation of benefits.

In the following article Professor Ahmet Davutoglu, known as the intellectual architect of Turkish foreign policy as the chief foreign policy adviser to Turkish Prime Minister Recep Tayyip Erdogan, explains the principles of Turkey's foreign policy vision. Reflecting upon cultural, strategic and geographical depth of Turkey Davutoglu describes Turkey as a "central country" with multiple regional identities, not a peripheral one. He underlines that Turkey's soft power is its democracy.

Bahar Rumelili analyzes the identity dimension of EU-Turkey relations. She contends that European and Turkish identities are undergoing a continuous process of reconstruction and negotiation in the context of EU-Turkey relations. In response to the arguments of those who oppose Turkey's EU membership on the identity ground she claims that a constructivist perspective foresees the possibility that European and Turkish identities can be reconstructed in such a way as to make the justification of Turkish membership possible and desirable from an identity viewpoint.

Harry G. Tzimitras explains the forces behind the Turkish-Greek rapprochement, its prospects and its limitations. He asserts that rapprochement has acquired not only a social base but also an institutional framework, namely the EU that constitutes a sustainable ground for cooperation. However nationalism is still identified as an obstacle to rapprochement.

Kudret Bulbul, Bekir Berat Ozipek and Ibrahim Kalin ask a straight question: Is there an anti-Westernism in Turkey? Having conducted in-depth interviews throughout Turkey with different social segments they find out that there is no anti-Westernism in Turkey based on religion, culture, or civilization. The authors conclude that Turkish-Islamic civilization as a form of identity does not prevent the Turks from seeing a number of common values between Islam and the West.

Apart from these resourceful articles Insight Turkey continues to include an ever expanding section of book reviews.

No more surprise for the next issue! But prepare yourself for another big debate: Is Turkey a "regional" or "soft power"?

Torn Identities and Foreign Policy: The Case of Turkey and Japan
Hasan Kosebalaban

Europeanization and Nationalism in the Turkish-Greek Rapprochement
Harry G. Tzimitras

Discussing Recent Literature on Turkish Politics: The Myth within the Myth
Michael Gunter