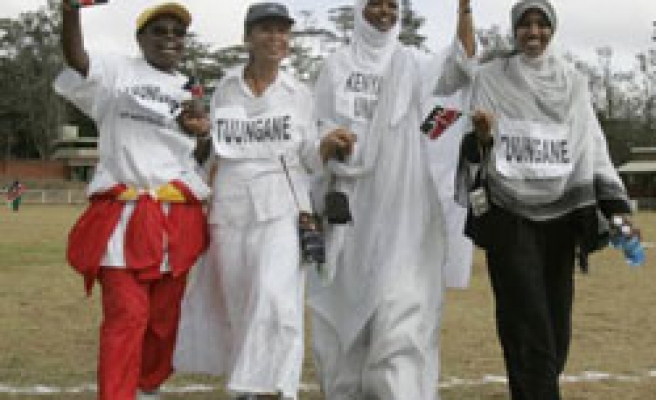 Almost every country in the world still has laws that discriminate against women, and promises to remedy this have not been kept, the top United Nations human rights official said today, speaking on the eve of International Women's Day.

"Many States appear to have simply ignored the commitments they have made", UN High Commissioner for Human Rights Louise Arbour stated. "It is shameful that, in the 60th anniversary year of the Universal Declaration of Human Rights, fundamental rights are still not enjoyed by many women around the world.

"In some cases, they suffer from multiple forms of discrimination, such as race, age or disabilities as well as their gender. Unless states take their commitments seriously, investing in women and girls will remain a matter of rhetoric", she added.

This failure to create genuine legal parity between men and women is having "a detrimental effect on women in many countries – sometimes to a devastating degree," according to a new report commissioned by the High Commissioner's Office (OHCHR).

One of the most dangerous examples of this involves the recognition of sexual abuse as a crime under a country's laws and enforcing related legislation. "Rape is recognized as a crime in most legal systems," said Ms. Arbour. "But, even when it is, inadequate legislation or local traditions often mean laws are not properly enforced.


"In addition, at least 53 States still do not outlaw rape within marriage, and men frequently enjoy total impunity for physical as well as sexual violence against their wives," she noted.


The High Commissioner stressed that strengthening legal frameworks to protect women and to ensure their rights is crucial to combat violence against them. "What is clear, is that many States are failing to live up to their promises to review their laws and root out institutional discrimination, and millions of women continue to suffer grave injustices as a result."

INVESTING IN WOMEN AND GIRLS

The theme of this year's International Women's Day, "Investing in Women and Girls," is a timely reminder that women's access to sources of finance, their participation in decision-making processes and opportunities for sustainable livelihoods are vital to "bridging the gap between universal human rights standards and the realities of the majority of the world's women," they said.


The group called on States, donors and the private sector to step up efforts to "respect, protect and fulfil women's civil, cultural, economic, political and social rights, and allocate adequate resources towards addressing discrimination and violence against women."


The joint statement was issued today by the Special Rapporteur on Violence against Women, its Causes and Consequences, Yakin Ertürk; the Special Rapporteur on adequate housing, Miloon Kothari; and the Independent Expert on the effects of economic reform policies and foreign debt on the full enjoyment of human rights, particularly economic, social and cultural rights, Bernards A. N. Mudho.

A new report released by the International Labour Organization (ILO) on the occasion of International Women's Day finds that while more women are working than ever before – 1.2 billion in 2007 – they are also more likely than men to get low-paid jobs without any social protection and basic rights.

"Global Employment Trends for Women 2008" points out that access to labour markets and to decent jobs is crucial to enhancing gender equality, and most regions have a long way to go in realizing the untapped potential women offer for economic development.

"The workplace and the world of work are at the centre of global solutions to address gender equality and the advancement of women in society," said ILO Director-General Juan Somavia. "By promoting decent work for women, we are empowering societies and advancing the cause of economic and social development for all."

Meanwhile, the UN Children's Fund (UNICEF) marked the Day by calling for better access to maternal health care, which will reduce the estimated half a million pregnancy-related deaths that occur each year, as well as help decrease child mortality rates.

It is estimated that one in four pregnant women currently receives no antenatal care, and that more than 40 per cent give birth without the assistance of a skilled attendant.