Iran expects no US or Israeli attack: FM

Iran says its nuclear programme is aimed only at generating electricity. U.S. and its ally in Middle-East Israel claims Iran is seeking to build nuclear bombs in spite of Israel already has. 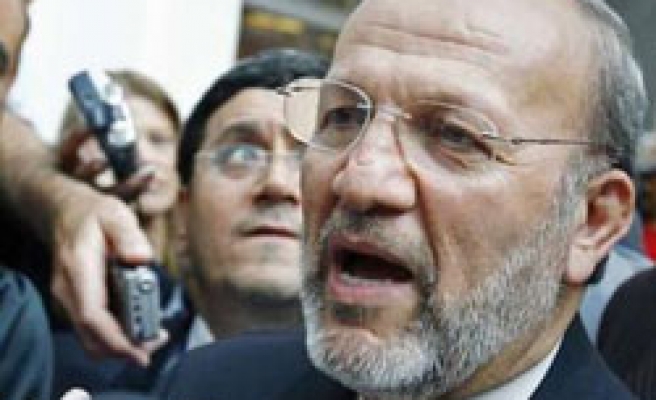 Iran's foreign minister said on Saturday he believed neither the United States nor Israel would want to get entangled in a new Middle East crisis and attack the Islamic Republic over its nuclear programme.

Mottaki told the official IRNA news agency that Iran's response would be "firm and pounding" if its two arch-foes launched strikes against the country.

But, he added: "Of course, the Zionist regime and the U.S. do not possess such capacities to want to involve themselves in new crises."

"The Zionist regime is still involved in the after-shocks of the war with Lebanon," Mottaki said, referring to Israel's inconclusive 2006 war with Hezbollah guerrillas.

"And the U.S. still does not possess the capacity to enter another crisis in the Persian Gulf region."

Iran says its nuclear programme is aimed only at generating electricity. U.S. and its ally in Middle-East Israel claims the world's fourth-largest oil exporter is seeking to build nuclear bombs in spite of Israel already has.

Washington has said it wants diplomacy to end the nuclear row but has not ruled out military action should that fail.

Israel, long assumed to have its own atomic arsenal and nuclear bombs, has sworn to prevent Iran from emerging as a nuclear-armed power.

Last month it staged an air force exercise that stoked speculation about a possible assault on Iranian nuclear sites.

Iran has vowed to strike back at Tel Aviv and U.S. interests and shipping if it is attacked. Tehran says missiles fired during Revolutionary Guards wargames on Wednesday included ones that could hit Israel and U.S. bases in the Middle East.

"The recent manoeuvre ... and the firing of indigenously produced missiles was the display of the Islamic Republic of Iran's capabilities and the scientists and innovators of our country," Mottaki said.

Asked how concerned President George W. Bush's administration was about the Iranian test-firings, White House spokeswoman Dana Perino told reporters in Washington on Friday: "I would just characterise it as continued Iranian defiance of international obligations and further isolating its people."

Perino said it would "re-strengthen" the international community's resolve in the standoff with Iran, but she also stressed Washington's aim of reaching a diplomatic solution.

Analysts say any U.S. or Israeli attack on Iran would be limited to air strikes, rather than a full-scale attack with U.S. ground forces, which are tied down in Iraq and Afghanistan.

They say Iran could respond with unconventional tactics, such as deploying small craft to attack ships, or using allies in the area to strike at U.S. or Israeli interests.