Iran has warned that further UN sanctions over Tehran's contentious nuclear programme could derail ongoing negotiations toward a settlement. 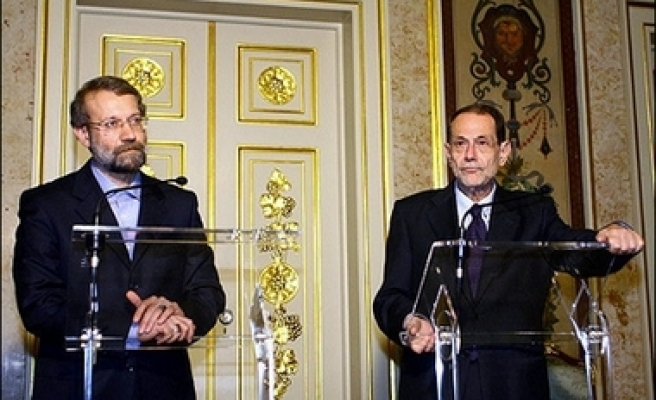 Iran has warned that further UN sanctions over Tehran's contentious nuclear programme could derail ongoing negotiations toward a settlement.

It would be natural for some to try to destroy the negotiation process, Larijani said, referring to the prospect of new UN sanctions.

However, "for (most) countries, the prevalence of tranquility would be more important," he said after Saturday's talks in Lisbon, Portugal, with Javier Solana.

Solana described the talks as "constructive", and said the two planned to meet again in three weeks.

Since December, the council has imposed two sets of sanctions for Iran's refusal to freeze both its uranium enrichment and construction of a heavy-water reactor for producing plutonium.

It also demands that Iran end its stonewalling of the International Atomic Energy Agency, or IAEA.

On Friday, the IAEA said the Islamic republic had agreed to provide answers on past suspicious nuclear activities within two months, a sign that Tehran was ready to make concessions in order to weaken international pressure against it.

But Larijani, speaking after meeting Mohamed ElBaradei, the IAEA chief, at the agency's Vienna headquarters on Friday, suggested the offer was conditional on reaching a "political understanding with Mr. Solana" on Saturday.

That was apparent shorthand for a larger deal that would allow for the start of talks between Iran and the five permanent council members and Germany, without the present precondition of a total enrichment freeze.

In a further sign that compromise might be possible, British, French and German officials have begun debating whether to tolerate a less-than-full enrichment freeze by Iran, a stance that could put them at odds with Washington, officials in Vienna told The Associated Press news agency on Friday.

Germany was supportive of such a concession, while France was opposed and Britain noncommittal, said the officials, who included US and European diplomats and government employees.

They said the talks were preliminary, however, and that nothing had been decided. Last Mod: 24 Haziran 2007, 12:27
Add Comment