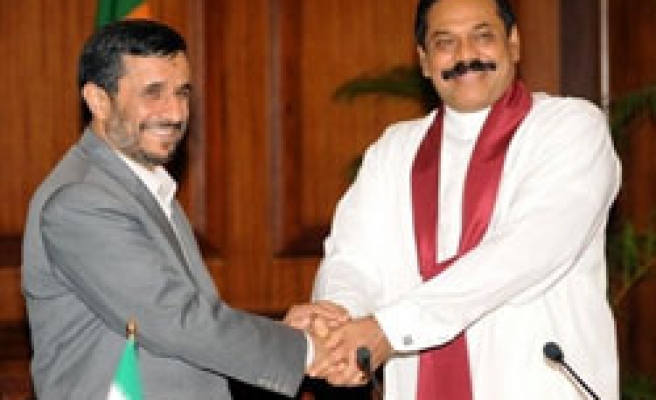 Ahmadinejad and Sri Lankan President Mahinda Rajapakse planted an ebony sapling to launch work at the Sapugaskande refinery, just outside the capital Colombo.

The four-year upgrade will triple Sri Lanka's refinery capacity to 150,000 barrels per day from the current 50,000 barrels.

Iran, which supplies 70 percent of Sri Lanka's oil needs, has agreed to pay for 700-million-dollars of the upgrade, petroleum minister A.H.M. Fowzie said at the ceremony.

He said it would make Sri Lanka self-sufficient in aviation fuel and tar.

Work on the hydro power project was instead launched by Sri Lankan Prime Minister Ratnasiri Wickremanayake and senior officials from the visiting 15-member Iranian delegation.

Once completed in four years, the hydro power project will add 100 megawatts to the national grid, officials said.

Ahmadinejad, who flew to Sri Lanka from Pakistan on Monday, did not meet the press, but Rajapakse's office said the Iranian president was keen to strengthen political, economic and culture ties.

"Iran had made great strides in the scientific and technical spheres and was ready to share the benefits of these achievements with its friends," Rajapakse's office said quoting Ahmadinejad.

Ahmadinejad was to leave Sri Lanka later Tuesday for India.