Parliament is scheduled to take its summer recess from Wednesday, but the electoral commission needs the law in place before it can complete preparations for the polls. 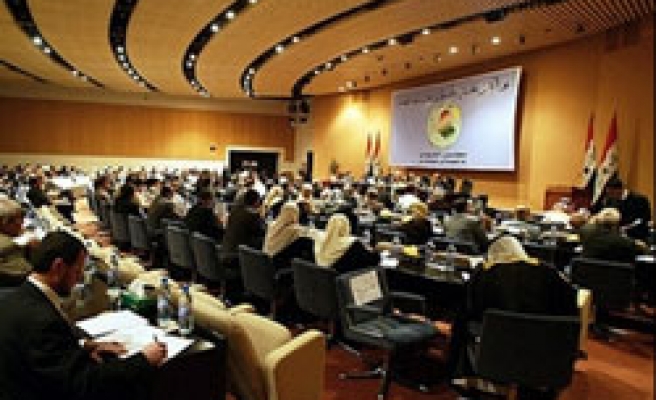 Iraq's parliament speaker on Wednesday called a special session to try to resolve a bitter row over a provincial elections law that has triggered several days of street protests by Kurds.

Mahmoud al-Mashhadani said the session would be held on Sunday. Parliament is scheduled to take its summer recess from Wednesday, but the electoral commission needs the law in place before it can complete preparations for the polls.

The election is expected later this year or early in 2009.

"I asked parliament to meet in an extraordinary session on Sunday to decide this issue. We cannot have the election without a compatible solution," Mashhadani told a news conference.

Parliament passed the law last week but Kurdish lawmakers boycotted the session. President Jalal Talabani, a Kurd, then rejected the law as unconstitutional and sent it back.

The row is over voting in Kirkuk, a northern city that is disputed between Kurds, Arabs and ethnic Turkmen.

The law would have delayed voting in Kirkuk, assigned fixed seat allocations to each ethnic group and replaced Kurdish security forces in the city with troops from other parts of Iraq, all measures Kurdish parliamentarians rejected.

Arabs and ethnic Turkmen want it to stay under central government authority. They believe Kurds have intentionally stacked Kirkuk with Kurds in an attempt to tip the demographic balance in their favour in any ballot.

Kurds regard the city -- which lies just outside the largely autonomous region of Kurdistan -- as their ancient capital and are keen for a vote.

Mashhadani said political blocs would meet over the coming days to try to reach a compromise on a law that outlines procedures for the polls.

Hundreds of Kurds protested in the Kurdish city of Sulaimaniya on Wednesday, following a larger protest the day before in Arbil, capital of the Kurdistan region.

A suicide bomber killed 23 people during a street demonstration against the law in Kirkuk on Monday.

The elections will provide early clues on how Iraq's Shi'ite, Sunni and Kurdish factions and other minority groups will fare in parliamentary elections, scheduled for late 2009.