Democratic presidential hopefuls have heaped criticism on the Bush administration's Iraq policy in an early first debate of the 2008 presidential campaign. 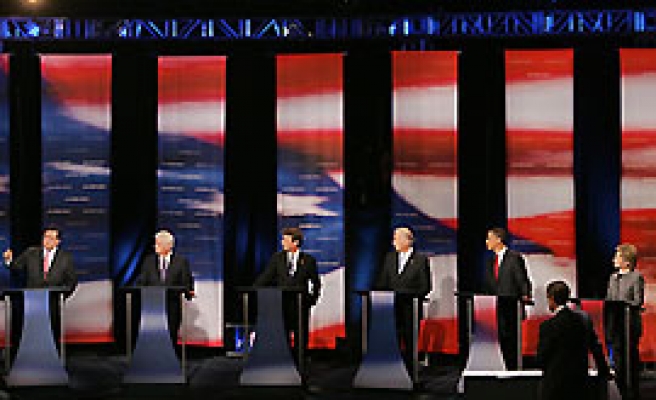 Democratic presidential hopefuls have heaped criticism on the Bush administration's Iraq policy in an early first debate of the 2008 presidential campaign.

"The first day I would get us out of Iraq by diplomacy," said Bill Richardson, the governor of New Mexico state, one of eight rivals on the debate stage on Thursday night.

"If this president does not get us out of Iraq, when I am president, I will," pledged Senator Hillary Rodham Clinton of New York.

But Clinton found herself on the receiving end of criticism when John Edwards, a former North Carolina Senator, said she or anyone else who voted to authorize the war should "search their conscience."

Edwards, who ran for vice president alongside John Kerry in the 2004 presidential campaign, also cast his vote for the invasion when he was in the Senate, but he has since apologised for it.

Of the eight candidates participating in the debate at South Carolina State University, four voted earlier in the day to support legislation that cleared Congress and requires the beginning of a troop withdrawal from Iraq by October 1.

The legislation sets a goal of a complete withdrawal by April 1, 2008.

"We are one signature away from ending this war," said Senator Barack Obama of Illinois.

"I am proud that I opposed this war from the start," he said in a jab at those on the stage who voted to authorise the invasion.

He said if Bush would not change his mind about vetoing the bill, Democrats need to work on rounding up enough Republican votes to override him.

In addition to Obama and Clinton, Senators. Joe Biden of Delaware and Chris Dodd of Connecticut also cast votes earlier in the day in favour of the legislation.

Biden said the Bush administration was pursuing a "fundamentally flawed policy" in Iraq, urging the president not to exercise his veto power.

Dodd, for his part, labelled the administration's Iraq strategy a "failed policy".

Kucinich took a somewhat different line from the senators on stage, saying it made no sense to oppose the war and then turn around and vote for more money as they did.

Kunich voted against the legislation that cleared Congress earlier in the day.

Bush is barred by the US constitution from running for re-election next November, and the result is an extraordinarily early start to the campaign to succeed him.

While Iraq dominated the debate's early moments, other issues also came up in questioning.

Five of the eight - Gravel, Biden, Dodd, Kucinich and Richardson – raised their hands when moderator Brian Williams of NBC News asked whether they had ever had a gun in their home.

At another point in the debate Edwards was asked about having paid for a $400 haircut from campaign donations rather than from his own wallet.

"That was a mistake, which we remedied," he said.