The White House and Congress failed to strike a deal Friday after exchanging competing offers on an Iraq war spending bill that Democrats said should set a date for U.S. troops to leave. 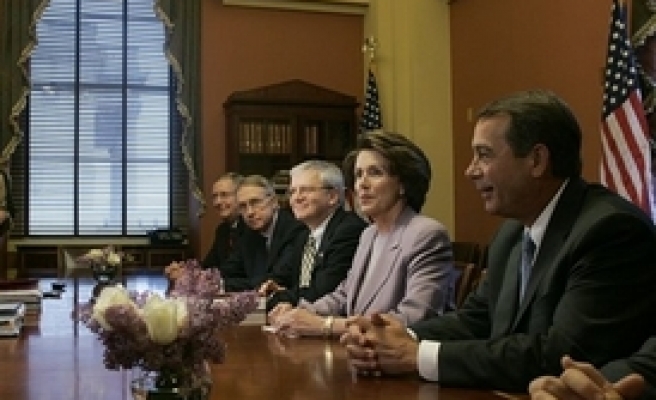 "Timelines for withdrawal are just not the right way to go, and that cannot be the basis for funding our troops," said Joshua Bolten, White House chief of staff, after a nearly 90-minute meeting on Capitol Hill.

The offer marked the Democrats' first major concessions in a weekslong battle with the White House on war funding.

"To say I was disappointed in the meeting is an understatement," Reid, D-Nev., told reporters. "I really did expect that the president would accept some accountability for what we're trying to accomplish here."

At stake is more than $90 billion the president says is needed to cover the costs of combat in Iraq and Afghanistan through September. The Democratic-controlled Congress on May 1 sent Bush a bill that would have paid for the war but also would have demanded that troops start coming home by Oct. 1. Bush vetoed the measure that same day.

The U.S. has spent more than $300 billion on Iraq military operations so far, according to a report Friday by the Government Accountability Office.

For their part, the administration and congressional Republicans said they were willing to consider legislation that sets standards for the Iraqi government and possibly restricts U.S. aid if Baghdad fails to live up to its promises.

In question, however, is whether the White House will accept binding consequences if the Iraqi government fails. Bush's aides say the president should be able to waive those restrictions — an offer Democrats have said is too weak.

According to GOP and Democratic aides, Pelosi and Reid did not reject Bolten's suggestion of setting benchmarks, but also did not embrace it. Their focus was identifying a date U.S. troops will leave Iraq, the aides said.

Also not ruled out is that Democrats will send Bush next week another bill he might reject.

"I was a little surprised that (the) Democratic leaders, at least so far, seem so dug in on that position" of setting a timetable, Bolten said. "Because it's a position that ... the president vetoed and which was sustained in" both chambers.

The Democrats' insistence on a timetable comes as the party is under substantial pressure not to cede ground on the unpopular and costly war, in its fifth year. Particularly in the House, where a large number of members were elected last fall on anti-war platforms, many Democratic rank-and-file say they would oppose any legislation that does not advance the idea of bringing troops home.

"It is clear that the difference between the Democrats and the president is the issue of accountability," said Pelosi, D-Calif. "He will not accept any accountability or responsibility for what has happened there."

"What a principled stand to take when we're talking about our men and women in uniform in Iraq taking on the enemy in a war that I think most Americans want to win," said Boehner, R-Ohio.

Pelosi said negotiations with the White House were not dead, but she and Reid made it clear they would proceed in drafting a new bill to be voted on next week.

The Democrats declined to say what their next bill will look like in light of Friday's meeting. But they insisted, as they have done for weeks, that nothing — including a timetable on the war — was off the table.

"Our troops will be funded," she said.