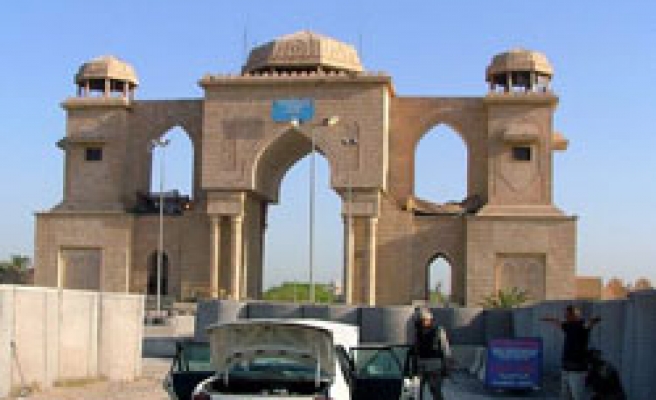 A U.S.-based investment group laid the foundation stone for a $100 million luxury hotel in Baghdad on Saturday, a move Iraqi officials said showed the country was open for business with violence at a four-year low.

The five-star Baghdad Two Rivers hotel project -- in the heart of the capital's fortified government and diplomatic Green Zone -- was the first business proposal to be licensed by Iraq's new National Investment Commission.

"It is a strong message to investors and businessmen in Iraq and abroad that investment in Iraq has truly started," Ahmed Ridha, chairman of the commission, told reporters.

Iraq's foreign direct investment was a mere $272 million in 2006, according to United Nations statistics.

The archway is formed by interlocking blades held by hands said to be modelled on those of former Iraqi President Saddam Hussein, and is next to Iraq's tomb of the unknown soldier.

"We have studied the investment situation in Iraq and think it is very positive ... We believe the security is just right for our investment," said Robert Kelley, chief executive of the U.S.-based Summit Global Group, which is building the hotel.

THE HOTEL IS EXPECTED TO OPEN IN JUST OVER A YEAR

The Summit Global Group is a special purpose investment vehicle set up for the project and will mobilise funds from investors. The identify of the investors was unclear.

Kelley said there were Iraqi investors involved and "Iraqi funds available" but he declined to elaborate.

An Iraqi investment adviser to the project who declined to be identified said the investors were all American, and that the project had received support from the U.S. government.

"I want to be very clear -- this will be an Iraqi project. It will be Iraqi companies that construct this hotel ... It will be Iraqi jobs that will be created and Iraqis who will operate the hotel when it is opened," Kelley told reporters.

International hotel operators are currently in talks to run the hotel, but Kelley declined to specify names.

Iraq has pushed for investors in any sector, including oil, to open an office in Iraq if they are granted a licence, and Kelley said the hotel aimed to cater to businessmen who would be eyeing investments in Iraq.

Iraq's new Investment Commission says it has already received proposals worth tens of billions of dollars since its launch in December. It issues licences and can grant incentives such as 10-year tax breaks.

The commission's aim is to boost employment in Iraq, where some estimates put joblessness at more than 30 percent, to cement recent security gains.

Iraq needs massive investment to repair its infrastructure and stimulate its economy after years of war and sanctions, and officials repeatedly call on foreign firms to come.

Kuwaiti firm Al-Aqeelah said this week it had lodged a proposal for a multi-billion dollar housing and tourism complex in the holy southern Shi'ite city of Najaf, and has already gained a licence to open a new airport in the city.