The original deal was valued at $670 mln at a time when oil prices were much lower than today, but it would have become far more lucrative for the Chinese if they were allowed to keep the production sharing terms at today's prices. 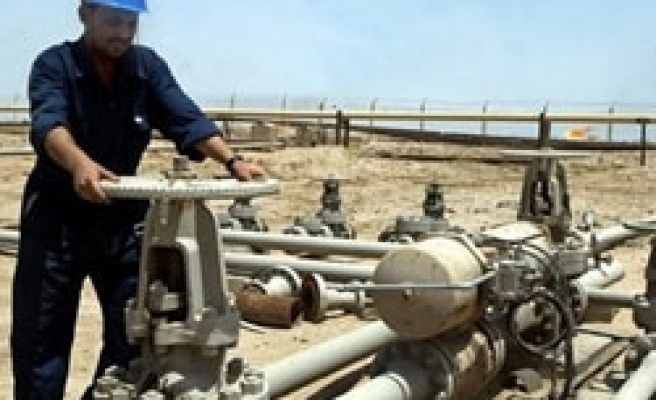 Iraq will soon sign its first big international oil deal since the fall of Saddam Hussein, a $1.2 billion oil service contract with China, oil minister Hussain al-Shahristani was quoted as saying on Tuesday.

The deal covers a small field producing just 90,000 barrels per day and replaces an earlier deal signed under Saddam. But the terms described by Shahristani give a clue to the tough line Baghdad is likely to take in deals with other foreign firms.

It replaces a production sharing agreement that would have given a Chinese firm a long-term stake in profits from the Adhab oilfield with a services contract in which the Chinese receive fees for work, but Baghdad keeps the future profits.

"We have held talks with (the Chinese) for a year, and the terms of the deal were changed to a service contract. The Chinese have agreed on that, with a value of $1.2 billion," Shahristani told the an-Noor newspaper.

Foreign firms are keen to have access to the OPEC country's oilfields, the world's third largest. But with oil prices high Baghdad has been negotiating from a position of strength, while war has kept firms from setting up a presence in Baghdad.

The oil minister is travelling to China at the end of this month to discuss the deal, which was orginally signed in 1997 between Iraq and the China National Petrolium Company (CNPC).

The original deal was valued at $670 million at a time when oil prices were much lower than today, but it would have become far more lucrative for the Chinese if they were allowed to keep the production sharing terms at today's prices.

Iraq had said in the past it would honour the Saddam-era deal with the Chinese, but wanted to renegotiate it.

Iraq now exports about 2 million barrels of oil per day, roughly equivalent to exports under Saddam, but says that it can quickly boost production when it begins repairing infrastructure that was neglected during decades of sanctions and war.

The high price of oil means Baghdad is flush with cash and has little need of foreign financing for projects, although it wants to import expertise and technology from foreign firms.

Iraq is negotiating six other short-term service contracts worth about $500 million each with foreign firms or consortiums, but those deals have been long delayed. A U.S. diplomat said this week he expected most or all of them would be scrapped.

Foreign oil companies are seen as much keener on production sharing deals, which would give them a stake in future oil profits, rather than service contracts.Dozens of oil firms are expected to compete for long-term deals which the government says it hopes to open for bidding next year.

He said the field covered by that deal, Phase II of the West Qurna oilfield, was one of the biggest in Iraq. LUKOIL has already been informed that rights to the field will be offered in a second round of bidding coming soon, he said.

He also said a deal was almost complete with a large global firm on a joint venture to produce natural gas to generate electricity at home while liquefying and exporting the surplus.

He did not name the company, but Shahristani has previously discussed negotiations with Royal Dutch Shell on a project that would collect gas Iraq now burns off at oilfields.