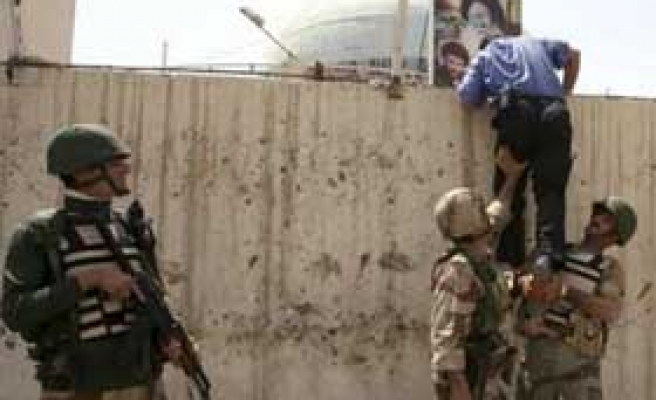 Sunnis residents of Al-Adhamiyah district in Baghdad were fuming Saturday, April 21, at US construction of a "security wall", saying it would harden the city's already bitter sectarian divisions and isolate Iraqis from one another.

Branding the barrier a "weird idea," the housewife said the barrier is not a panacea to the city's deadly sectarian violence.

"Erecting concrete walls between neighborhoods is not a solution to the collapse in security and the rampant violence. If so, Baghdadis would find themselves in a maze of high walls overnight," she said.

On April 10, US paratroopers began hauling six-tonne (14,000-pound) sections of concrete wall into place around the Sunni district of Adhamiyah.

The wall is designed to prevent Shiite death squads from launching attacks to drive out the Sunnis, and to prevent Sunni insurgents from using the pocket as a base for raids and bombing runs into Shiite areas.

In the name of security, anything goes

The area is to become what the US military called a "gated community" protected by barriers and checkpoints manned by Iraqi troops. Eleven days after the project began, the highway dividing Adhamiyah from its Shiite neighbors is lined with tall concrete barriers.

"That community will be completely gated and protected," said Lieutenant Colonel Thomas Rogers, commander of the 407th Brigade Support Battalion.

Adhamiyah is not the only area of Baghdad to have walls, and no one pretends that such barriers are protection in themselves against attacks.

The International or Green Zone, which houses the US embassy and many Iraqi state buildings, has a wall and concentric rings of armed security.

On April 12 a suicide bomber still managed to launch a deadly attack inside the parliament building — well inside the Green Zone.

While they jokingly call their project the "Great Wall of Adhamiyah," in a reference to China's most famous feat of military engineering, US officers see it as more akin to one of the fenced suburbs around US cities.

In the Middle East there is a still more incendiary comparison to be made with Israel's separation wall enclosing Palestinian territory.

And as the citizens of Nicosia and Berlin found out, once a city is divided it can stay so for years.

In Adhamiyah, Sunni residents suspect a plot to send them into "internal exile" while the Shiite-led government takes over.

"It appears that partitioning through federalism will divide not only Iraq but also Baghdad," sneered 29-year-old Ali Ibrahim, referring to moves in parliament to split Iraq into three or more autonomous regions.

"People here are talking about the new ID cards (Prime Minister Nuri) Al-Maliki's government has decided to issue to al-Adhamiyah's inhabitants. Is this because we're special, or because we're persona non grata?" he asked.

Mustafa, a 25-year-old computer programmer, shared his anger, saying: "I resent the barrier. It will make Adhamiyah a big prison."

Residents fear that the wall would isolate Iraqis from one another and turn the district into an open-air prison.

"We do not want to see segregating walls between us and the rest of Baghdad. I'm afraid this wall will isolate us, and stricter security procedures stop us from getting out," added perfume dealer Mohamad, 26.