Ireland gets its first black mayor

Ireland elected its first black mayor, the latest sign of how rapid immigration is changing this once all-white nation. 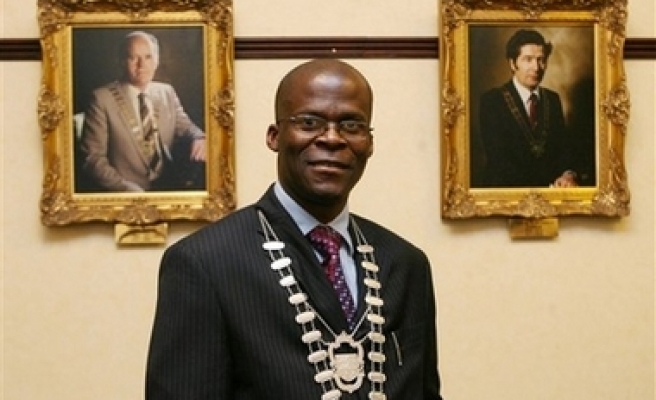 Ireland elected its first black mayor Thursday, the latest sign of how rapid immigration is changing this once all-white nation.

Rotimi Adebari, a Nigerian who arrived in Ireland seven years ago as an asylum-seeker, was elected unopposed to lead the council of Portlaoise, town west of Dublin.

Adebari, 43, who has been an independent politician on Portlaoise Town Council since 2004, was backed by both the right-wing Fine Gael party and left-wing Sinn Fein.

Adebari, who planned a post-election party Friday at the new parish hall in Portlaoise, called it "a great honor to become the No. 1 citizen of the town."

Little more than a decade ago, a black person in Ireland risked being gawked at, so rare was the sight of visitors from different racial backgrounds. But Ireland has absorbed more than 30,000 asylum seekers — particularly from Africa's most populous nation, Nigeria — since the mid-1990s, a wave attracted by Ireland's booming economy and its relatively lax immigration rules.

These days, West African entrepreneurs run stretches of shops in urban Dublin and other Irish towns and cities, and social activists like Adebari are encouraging the newcomers to integrate into their communities.

"I got involved in the community and I volunteered. It gave me the opportunity to meet people firsthand and they got to know me," Adebari said. "We all have to make an effort to reach out to one another."

Adebari traveled to Ireland with his wife and two boys in 2000 and claimed asylum on the basis of religious persecution, citing bloody clashes between Christians and Muslims in his homeland. His application was rejected because of insufficient evidence he had personally suffered persecution, but he gained residency because his third child, another boy, was born in Ireland.

Asylum-seekers flocked to Ireland in part to gain European Union citizenship on the basis of having a child born in the country. Ireland in 2004 stopped granting citizenship to foreign parents of an Irish-born child, a law that had been unique in Europe.

Adebari said he had trouble finding work at first — in part because of an Irish law that bars people from working while they are seeking asylum.

So he volunteered at a local tennis club, helped found a lobbying group for unemployed people in Portlaoise and ran for office, winning a council seat on his first try in 2004.

Since then he's finished a master's degree in intercultural studies at Dublin City University, founded a consultancy advising authorities and immigrant groups on how to work together, and hosts a weekly radio show on his local station, Midlands FM.

"I want to encourage immigrants to be a force in their communities, to engage with their communities," he said. "People will get to know you. Their perception of you will change just like that. That's what happened to me." Last Mod: 29 Haziran 2007, 10:47
Add Comment