Speaking at the 34th Islamic Conference of Foreign Ministers (ICFM), the foreign ministers termed Islamophobia the worst form of terrorism and called for practical steps to counter it. 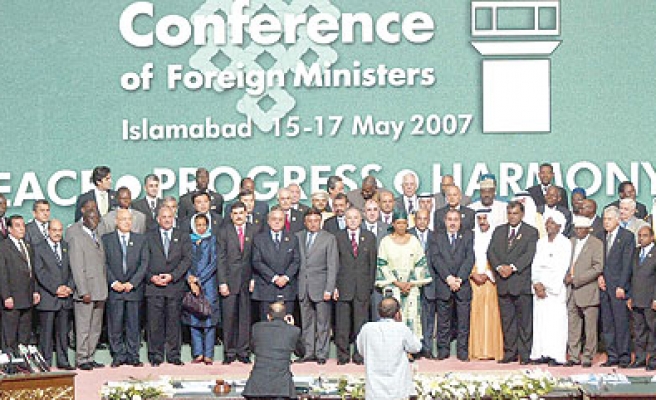 Foreign ministers of the Organization of the Islamic Conference (OIC) yesterday expressed grave concern at the rising tide of discrimination and intolerance against Muslims, especially in Europe and North America. "It is something that has assumed xenophobic proportions," they said in unison.

Speaking at a special brainstorming session on the sidelines of the 34th Islamic Conference of Foreign Ministers (ICFM), the foreign ministers termed Islamophobia the worst form of terrorism and called for practical steps to counter it.

The ministers described Islamophobia as a deliberate defamation of Islam and discrimination and intolerance against Muslims. "This campaign of calumny against Muslims resulted in the publication of the blasphemous cartoons depicting Prophet Muhammad (peace be upon him) in a Danish newspaper and the issuance of the inflammatory statement by Pope Benedict XVI," they said. During a speech in Germany last year, the Pope quoted a 14th Century Christian emperor who said the Prophet had brought the world only "evil and inhuman" things. The Pope's remarks aroused the anger of the whole Islamic world.

"The increasingly negative political and media discourse targeting Muslims and Islam in the United States and Europe has made things all the more difficult," the foreign ministers said. "Islamophobia became a source of concern, especially after the Sept. 11, 2001 attacks, but the phenomenon was already there in Western societies in one form or the other," they pointed out. "It gained further momentum after the Madrid and London bombings. The killing of Dutch film director Theo van Gogh in 2004 was used in a wicked manner by certain quarters to stir up a frenzy against Muslims," the ministers pointed out. Van Gogh had made a controversial film about Muslim culture.

The OIC foreign ministers deplored the misrepresentation in the Western media of Islam and Muslims in the context of terrorism. "The linkage of terrorists and extremists with Islam in a generalized manner is unacceptable," they said. "This is further inciting negative sentiments and hatred in the West against Muslims," they said. The ministers also pointed out that whenever the issue of Islamophobia was discussed in international forums, the Western bloc, particularly some members of the European Union, tried to avoid discussing the core issue and instead diverted the attention from their region to the situation of non-Muslims and human rights in the OIC member states.

The foreign ministers said prejudices against Islam were not helping the situation. "Because of Islamophobia, millions of Muslims in the Western countries, many of whom were already underprivileged in their societies for a variety of reasons, are further alienated and targeted by hatred and discrimination."

The selective application of the existing legal frameworks and anti-discrimination and anti-blasphemy laws in Western countries also came in for criticism. "They are being applied in a selective manner when the victims are Muslims," the ministers said.

The ministers also noted the many praiseworthy initiatives to bring together the West and the Muslim world such as the EU-OIC Forum of 2002, Dialogue Among Civilizations, Alliance of Civilizations and various other interfaith dialogue meetings. "However, it remains a fact that anti-Islamic sentiments are being fanned in the West with the implicit and explicit support of racist anti-immigrant and ultra-right political parties and certain media outlets."

The ministers agreed that in Europe there was a need to enhance efforts to promote greater understanding and awareness of Islam. "In the Muslim world, endeavors have to be made to dispel misperceptions about the West and to promote democracy, human rights and good governance."

According to OIC's European observers, the taking over of the European Union presidency by Slovenia in 2008 will augur well for Muslims. "Because Slovenia has declared that intercultural dialogue will be among the first four priorities of its EU presidency, it has accordingly set up a task force to implement the European Year of Intercultural Dialogue 2008' program." The OIC observers said the Slovenian minister of foreign affairs had already invited the OIC secretary-general to Ljubljana before or during the Slovenian EU presidency to discuss possible joint projects.

At the end of the session it was decided to shortlist reputable Muslim and non-Muslim think tanks, academics and NGOs in the US and UK and other leading European countries for cooperation in monitoring and countering anti-Islam campaigns. The ministers said Muslim think tanks and NGOs in the Western countries should be encouraged and urged to develop closer contacts with their non-Muslim counterparts and to remain engaged in regular contact and dialogue. They felt the international media should be properly cultivated to motivate them to be more responsible in carrying out their responsibilities. Last Mod: 17 Mayıs 2007, 10:14
Add Comment