Israeli Foreign Minister Tzipi Livni held talks with Egypt and Jordan, which are trying to persuade Israel to accept an Arab initiative aimed at reviving the Middle East peace process. 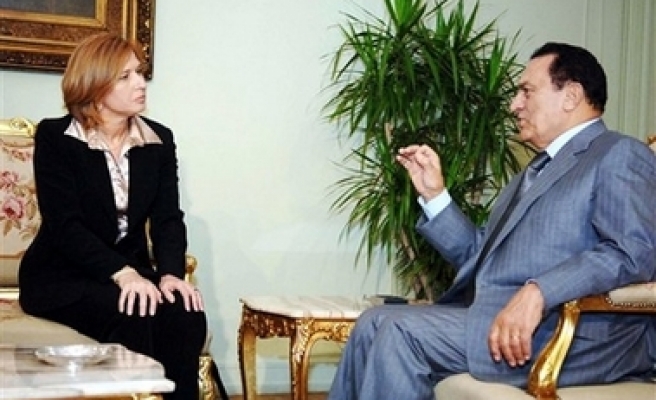 But in Damascus, Syrian President Bashar Assad downplayed any prospects for progress, saying the Israeli government is too weak to negotiate peace.

The Arab initiative promises full peace with all Arab nations if Israel withdraws from territories captured in the 1967 Middle East War and agrees to creation of a Palestinian state. It also calls for a "just solution" to the issue of Palestinian refugees. The Arab League has mandated Egypt and Jordan — the only Arab nations with peace treaties with Israel — to promote the offer to Israel.

Israel and the United States have said the plan could be a basis for reviving the Arab-Israeli peace process. But Israel has expressed reservations over many of its provisions, including the call to solve the Palestinian refugee issue.

After the meeting with Mubarak, Livni said the Egyptian and Jordanian foreign ministers would come to Israel as representatives of the Arab League for further talks on the peace offer.

Jordanian and Egyptian diplomats have visited the country in the past. But the fact that they are going as a delegation of the Arab League — the pan-Arab body that has long rejected direct talks with Israel — adds symbolic value to their visit.

"I do believe that the Arab world has a very important role," Livni said. "We share the same goal, all the moderates in the region, of two states living side by side in peace."

Arab nations first launched the Saudi-led initiative in 2002 but it met with outright Israeli rejection. They revived it at a summit in Riyadh in March.

The Arabs are hoping the initiative will be an incentive for Israel to make concessions needed to reach peace deals with Syria and the Palestinians.

Israel has reservations about a full withdrawal and rejects the right of return for refugees, fearing a flood of Palestinians into pre-1967.

But Israel is seeking that the initiative will improve ties with Arab countries and isolate Syria and the Palestinian Hamas.

Israel has expressed the willing that Arab powerhouse Saudi Arabia could join the discussions, but the kingdom has rejected direct talks with Israel.

Al-Jazeera reported that Livni also met Omar Suleiman, Egypt's intelligence chief, who is in charge of the Palestinian portfolio.

Assad told Syria's parliament in Damascus on Thursday that Israel's government was too weak to make peace at this time. He said peace "requires strong leadership that can take decisive decisions, in addition to a mature public opinion that can push their governments in that direction."

"Both are not available now in Israel, particularly in the presence of a weak government which is unable of taking a strategic decision (for peace)," he said.

Israeli Prime Minister Ehud Olmert is trying to fend off calls for his resignation after a government commission report last week harshly criticized shortcomings of last summer's war against Hezbollah in Lebanon.

Olmert is scheduled to visit Jordan on Tuesday to meet with King Abdullah II in the ancient city of Petra on the sidelines of an annual Jordanian conference for Nobel laureates. Last Mod: 11 Mayıs 2007, 16:16
Add Comment