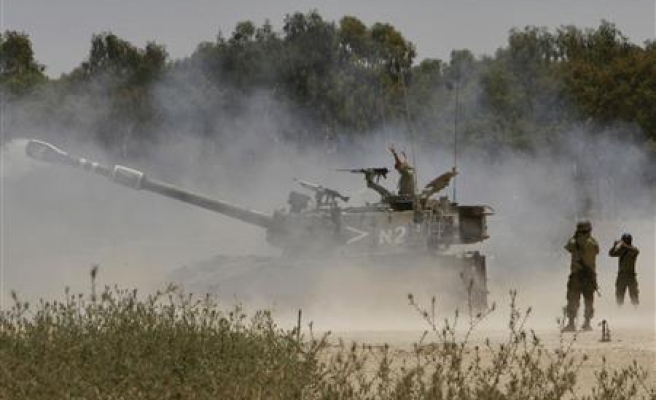 Israeli jets carried attacked four suspected arms caches and three other Hamas facilities across Gaza in the early hours of Wednesday, and an Israeli helicopter strafed a rocket launch site with machine-gun fire.

Palestinian officials said a total of 16 people were wounded, among them a pregnant woman and a teenage boy living next to an unoccupied building in Jabaliya that was hit.

An Israeli military statement said the target was a Hamas arms dump and that "secondary explosions were identified" an apparent reference to exploding ordnance.

The attacks came hours after the Jewish state threatened to kill Hamas leaders and launch a ground offensive in Gaza unless international pressure was brought to bear on Hamas to halt cross-border rocket attacks.

Asked if Ismail Haniya, the Palestinian prime minister, was on Israel's hit-list, he said: "I'll put it like this: There is no one who is in the circle of commanders and leaders in Hamas who is immune from a strike."

Sami Abu Zuhri, a Hamas official, said in response in Gaza: "Any harm to Prime Minister Haniya or any Hamas leader would mean a change in the rules of the game and the occupation [Israel] must be ready to pay an unprecedented price."

Al Jazeera's correspondent in Gaza, Nour Odeh, said it appeared that Israel was sending the message that any position it suspected was fair game.

Israeli assassinations on Palestinian leaders have failed to change the policies or positions of armed groups in the past, but Odeh said leaders of Hamas and other Palestinian groups in Gaza were taking the Israeli threat seriously.

They have lowered their profiles and taken extra security measures such as turning off mobile phones and staying off the streets.

A meeting between Hamas leaders and Mahmoud Abbas, the Palestinian president from the Fatah faction, was cancelled because of security concerns.

Abbas had travelled from his West Bank headquarters to Gaza for talks to salvage a truce with Israel and rein in factional fighting between the Fatah and Hamas.

On Tuesday, Palestinian women from the al-Aqsa Martyrs' Brigades, the armed wing of the Fatah movement, threatened to carry out suicide bombings if the attacks on Gaza continued.

They said they "would strike at the heart of the enemy".

On Monday, at least five Palestinians were killed in Gaza and an Israeli woman was killed when a rocket hit her car in Sderot.

Despite Israeli vows of harsh retaliation in response to Monday night's attack on Sderot, Ehud Olmert, the prime minister, acknowledged there is no quick solution for the rocket barrages.

In the past week, more than 150 rockets have landed in and around Sderot, a town of 24,000 people less than 2km from the Gaza border.

Hundreds of Sderot residents have been evacuated to hotels in other parts of the country.

Amir Peretz, the Israeli defence minister, during a meeting with the European Union's foreign policy chief, Javier Solana, called on the international community to take action immediately to stop Hamas from firing the makeshift Qassam rockets at Israel.

Tzipi Livni, the Israeli foreign minister, said: "It is our obligation to harm the rocket launchers and our obligation is to continue to harm Hamas."