Israeli troops killed more than 650 Palestinians last year — half of them unarmed civilians including some 120 children — a threefold increase from 2005, a leading human rights group said. 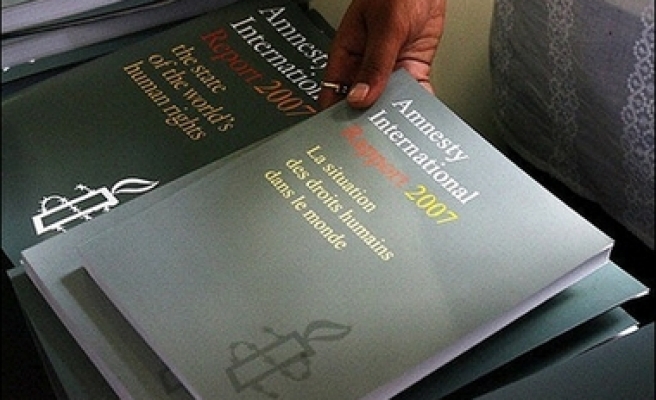 Israeli troops killed more than 650 Palestinians last year — half of them unarmed civilians including some 120 children — a threefold increase from 2005, a leading human rights group said Wednesday.

In its annual 2007 global report, Amnesty International also criticized Israel for deepening the poverty in Palestinian territories by withholding customs duties and widening a network of blockades and other travel restrictions.

The group accused soldiers and settlers of committing "serious human rights abuses, including unlawful killings, against Palestinians, mostly with impunity."

The number of Israelis killed by Palestinian armed groups diminished by half last year, to 27, including 20 civilian adults and one child, the report said.

By The Associated Press' count, 580 people were killed on the Palestinian side and 34 on the Israeli side in 2006.

The report "shows that the conflict can only be solved through diplomacy and not through military methods," the director of Amnesty's Israeli branch, Amnon Vidan, told reporters.


Most of the Palestinians were killed in the course of frequent air and artillery bombardments against the Gaza Strip, though dozens were also killed in the
West Bank, Amnesty said. Israeli attacks "escalated dramatically" after Palestinian armed men attacked a military post inside Israel in June 2006, capturing a soldier, the report said.

Amnesty accused Israel of violating the economic and social rights of Palestinians by restricting passage within Palestinian territories and keeping vital cargo and passenger crossings closed for large chunks of time.

Israel's withholding of hundreds of millions of dollars in tax duties to the Palestinians caused humanitarian conditions in the West Bank and Gaza to deteriorate "to an unprecedented level," the report said. Poverty, food aid dependency, health problems and unemployment have reached "crisis levels," it added.

Amnesty criticized Israel for the continued expansion of Jewish settlements and stepped-up construction of a West Bank barrier. Israel says it is building the enclosure to keep out attackers, but the barrier places about 10 percent of the West Bank on the "Israeli" side. Last Mod: 25 Mayıs 2007, 23:39
Add Comment