Ihab Hussein, a spokesman for the Hamas-controlled Interior Ministry in Gaza, said the increase was in keeping with the terms of the cease-fire brokered by Egypt. 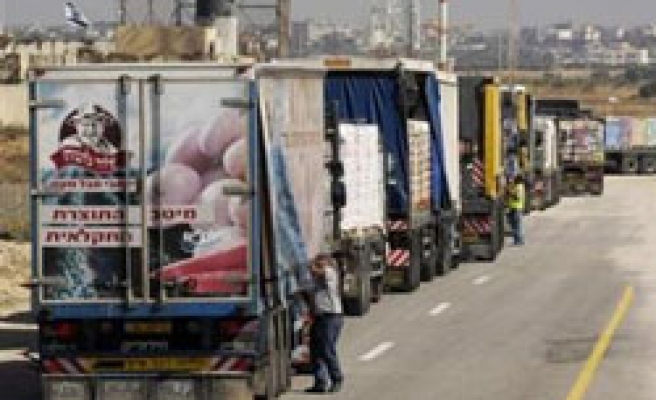 Israel was set to increase the number of trucks bringing badly needed supplies into the Gaza Strip on Sunday as a truce with Hamas entered its fourth day, a military spokesman said.

A total of 90 trucks would enter Gaza through the Sufa crossing during the day, up from between 60 to 70 before the truce went into effect, said spokesman 2nd Lt. Gil Karie.

Further increases will be weighed if the quiet continues, he said.

Ihab Hussein, a spokesman for the Hamas-controlled Interior Ministry in Gaza, said the increase was in keeping with the terms of the cease-fire brokered by Egypt.

The goods include milk, fruits and vegetables and other food products. Other goods, like cement, are supposed to be allowed in 10 days after the beginning of the truce, Hussein said.

But the amount of fuel sent into Gaza remained unchanged Sunday. Israel has cut fuel shipments, leading to a severe shortage and crippling transportation in the territory.

The truce has held since it went into effect on Thursday morning following months of clashes between the Israeli military and Gaza fighters.

A rocket warning system sounded an alert in southern Israel early Sunday, sending residents scrambling for bomb shelters. But the military said no rocket had been fired and the alert was likely the result of a technical malfunction.

In agreeing to the truce, Israel dropped an earlier demand that any deal include the release of an Israeli soldier that Hamas is holding. Israel soldier Gilad Schalit in a cross-border raid captured in 2006.

Israel's supreme court Sunday was due to hear a petition from Schalit's parents to block the deal, saying Prime Minister Ehud Olmert and other officials promised them Gaza's border crossings would not be opened as long as their son remained in captivity.

A deal on a prisoner swap that would see Schalit released in return for hundreds of Palestinians has stalled, mainly because of disagreements over which imprisoned PAlestinians Israel would free.