Olmert offered the Palestinians a "mini-state of cantons" in parts of the West Bank in talk with Abbas according to Israeli media. 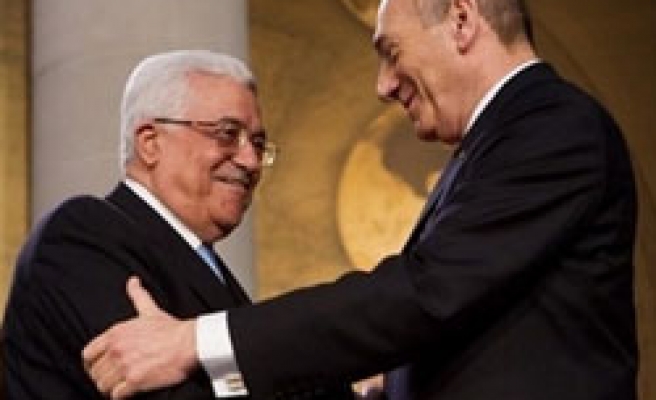 Israel is offering the Palestinians a "mini-state of cantons" in parts of the West Bank according to Israeli media.

Palestinian Authority officials said Monday that Israel was offering the Palestinians nothing more than a "mini-state of cantons" in parts of the West Bank, Israeli newspaper Jerusalam Post reported.

The officials told the newspaper that Israel's proposals were "completely unacceptable" and "provocative."

They also claimed that the US Administration was supporting the Israeli position.

"Today, it's clear to us that Israel has no intention of withdrawing from all the territories that were occupied in 1967," said one official.

"If the Israelis and Americans think that they will ever find a Palestinian leader who would accept less than the 1967 borders, they are living under an illusion."

The report quoted another top PA official as saying that maps presented by the Israeli government to the Palestinians in the past few weeks showed that Israel is planning to retain control over nearly half of the West Bank and large parts of eastern Jerusalem.

The Israeli maps, he said, "turn the Palestinian communities in the West Bank into cantons surrounded by Israeli military bases and large settlement blocs."

The official added: "We have made it clear to both the Israelis and Americans that they should throw away these maps. No Palestinian will ever agree to the presence of settlements or Israeli soldiers in the West Bank. This is in violation of [US President George W.] Bush's vision of two states living next to each other in peace."

They said they were surprised to hear reports in the Israeli media about certain progress that was ostensibly achieved during Monday's summit between Palestinian Authority President Mahmoud Abbas and Prime Minister Ehud Olmert.

"Apparently Olmert's office is spreading these rumors to divert attention from the problems he's facing at home," the officials said, referring to the latest police investigation against Olmert.

"The Israeli government is not serious about the peace talks," said Yasser Abed Rabbo, a senior PLO official closely associated with Abbas. "We don't believe that we can reach an agreement [with Israel] before the end of this year."

Abed Rabbo accused Israel of "deceiving" the Palestinians by continuing to build settlements while talking about the need to reach a peace deal.

"Israel does not want to change its policy," he added. "Israel wants to continue settlement expansion and the construction of the separation wall."

Chief Palestinian negotiator Saeb Erekat described the talks between Abbas and Olmert as "serious and thorough."

Erekat said Monday's talks focused on the final status issues. He said Abbas demanded an end to construction in the West Bank settlements and the reopening of closed PLO institutions in Jerusalem.

He said Abbas also demanded the release of Palestinian prisoners from Israeli jails, especially those who have been in prison for more than 20 years, as well as women, minors and political leaders such as Marwan Barghouti.

According to Erekat, Israel has agreed to grant residency status to 10,000 Palestinians who entered the West Bank and Gaza Strip over the past decade.
Last Mod: 06 Mayıs 2008, 14:12
Add Comment