A group of European parliamentarians met Palestinian Prime Minister Ismael Haniya in the Gaza Strip on Tuesday, sparking a protest from Israel which wants the West to maintain a year-old economic embargo and diplomatic boycott of the Hamas-led Palestinian 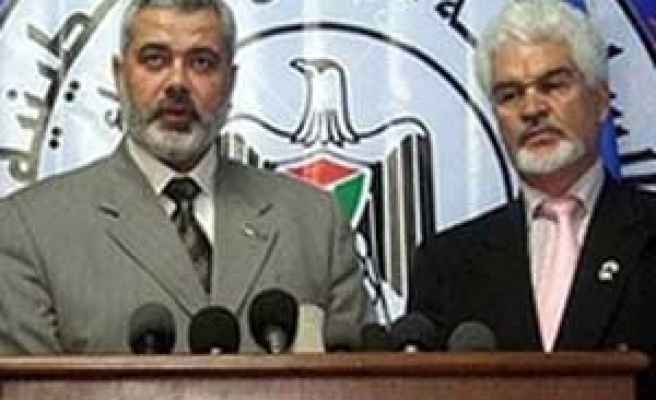 A group of European parliamentarians met Palestinian Prime Minister Ismael Haniya in the Gaza Strip on Tuesday, sparking a protest from Israel which wants the West to maintain a year-old economic embargo and diplomatic boycott of the Hamas-led Palestinian government.

The 25-member delegation was led by Cypriot MEP Kyriacos Triantaphyllides, the president of the European Parliament committee for relations with the Palestinian Legislative Council.

Haniys said the meeting indicated that “there are steady and confident steps towards lifting the siege.”

Calling on the West to end the direct aid embargo imposed after Hamas took office last March, Haniya said the international community must “work with the national unity government in an official and direct manner as it represents the will of the Palestinian people.”

Triantaphyllides told reporters that the European Union should deal with the Palestinian unity government that Hamas formed six weeks ago with President Mahmoud Abbas’ Fatah party.

He said the European delegation traveled to Gaza "to see exactly what the situation is because we are for helping and finding a solution to the problem.”

"We consider this as an opportunity for the road to peace," Triantaphyllides told reporters. “This financial embargo should be lifted."

Despite the optimism shown by Haniya and Triantaphyllides, an EU spokeswoman said the bloc's policy of shunning Hamas remains unchanged.

"The parliament is not the official representative of the European Union in matters of foreign policy," the spokeswoman said.

Palestinians hoped that the Hamas-Fatah coalition could end the embargo, but the West has so far refused to lift the freeze.

After the formation of the unity cabinet, the U.S. and EU said they would hold unofficial contacts with non-Hamas ministers, but stressed that they wouldn’t meet Hamas members until the group recognizes Israel, gives up anti-Israeli attacks and accepts past peace accords.

"The EU has classified Hamas as a terrorist organization and the EU leadership has boycotted Hamas," he told AFP. "Thankfully this delegation does not speak for the EU.

"Giving recognition and legitimacy to a Hamas will not help peace," he alleged.

In a separate development, Haniya said his government is doing its best to secure the release of BBC correspondent Alan Johnston, who was kidnapped last month in Gaza.

After meeting the EU delegation, the prime minister said it was important to the Palestinian government that Johnston be released and be able to resume his work.

Meanwhile, Palestinian Deputy Prime Minister Azzam al-Ahmad said again that the information he has is that Johnston is "in good health".

Speaking in New York, Ban said he wanted "to take this opportunity to plead for the immediate release of the BBC journalist Alan Johnston, abducted in Gaza".

More than 20 Western reporters and aid workers have been kidnapped in Gaza over the past year. All have been released unharmed a few days after their abduction, but Johnston has been held captive longer than any other foreign hostage. Last Mod: 02 Mayıs 2007, 10:28
Add Comment