Livni, a frontrunner to replace Ehud Olmert as prime minister after his planned resignation next month, recently said that US pressure may lead an uprising if the peace talks collapse. 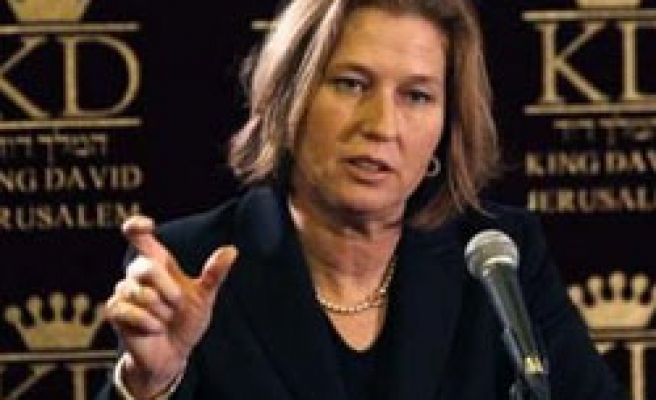 Israel's chief negotiator claimed on Thursday a Palestinian uprising could reignite if the international community piled "too much pressure" on the sides to paper over differences and rush into an agreement on statehood.

Israel, rejecting international pressure to ease restrictions on Palestinians, removed a checkpoint in the occupied West Bank on Thursday that had curbed movement outside a main Palestinian city.

An Israeli military spokesman said soldiers had been instructed to remove concrete blocks and a checkpoint where soldiers inspected traffic leading to Bir Nabala, a town near Ramallah, where the Palestinian government sits.

It was the third such checkpoint Israel has removed this month, meeting requests from the U.S. and Middle East envoy Tony Blair to help peace moves and to bolster Palestinian President Mahmoud Abbas's Western-backed government.

Tawfiq Nabali, head of the Bir Nabala village council, said the checkpoint that was lifted had restricted movement for more than 50,000 Palestinians living in 15 villages near Ramallah.

"We welcome any step in which the Israeli occupation leaves us alone, living in dignity without checkpoints and racism," Nabali told Reuters.

Palestinians say hundreds of Israeli roadblocks erected in the past eight years in occupied territory stifle their economy and amount to collective punishment.

Israel, which placed most of the barriers after a Palestinian uprising erupted in 2000 when peace talks failed, says the measures are necessary to prevent suicide bombers from reaching its cities.

Nabil Abu Rdainah, a top aide to Palestinian President Mahmoud Abbas, said pressure from world powers was needed to create the "right atmosphere" for the talks and he accused Livni of "wasting an opportunity to reach a peace agreement".

Although Palestine has insisted for a peace deal, Israel has made many difficulties. Livni, a frontrunner to replace Ehud Olmert as prime minister after his planned resignation next month, recently said that US pressure may lead an uprising if the peace talks collapse.

Livni, speaking in English to foreign reporters, cautioned against outside pressure to try to "bridge gaps that maybe it's premature to bridge or to reach something which is not the comprehensive agreement that we want to reach".

U.S.-sponsored peace talks launched last November have shown little sign of progress and have been marred from the start by violence and disputes over Israeli settlement building.

Chances of a deal appeared to fade further when Olmert announced last month that he would step down as prime minister once his centrist Kadima party elected a new leader in September. Polls show Livni leading the race to replace the corruption-hit Olmert as Kadima chief.

In her remarks, Livni played down Washington's timeline for a deal this year. "What is more important is the content and the nature of the understanding," she said.

Livni said she and her Palestinian counterpart in the negotiations, former prime minister Ahmed Qurie, were going beyond "vague ideas" about the percentage of West Bank land that Israel would yield.

"We need to line the borders on the map," she said.

Under a recent Olmert proposal, Israel would withdraw from some 92.7 percent of the occupied West Bank and all of the Gaza Strip, according to Western and Palestinian officials briefed on the negotiations.

But Palestinians want Israel withdraw Arab East Jerusalem which is the capital of their Paletsine.

Olmert proposed a 5.3 percent land swap, giving the Palestinians a desert territory adjacent to the Gaza Strip in exchange for West Bank land that Israel would keep.

Abbas rejected the proposal because it would not provide for a contiguous Palestinian state with Jerusalem as its capital, a spokesman said.

Olmert's proposed "shelf agreement" would not address the thorny issue of Jerusalem, a key Palestinian demand.

Israel has also ruled out implementing any statehood agreement until Abbas reins in militants and re-establishes control of the Gaza Strip, which Hamas seized a year ago.