Israel has carried out fresh strikes against Hamas positions in the Gaza Strip, killing four Palestinians. 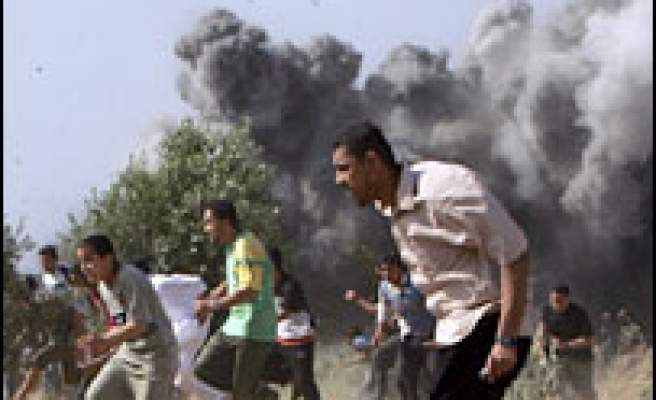 Israeli planes staged strikes in quick succession from Gaza City in the north to the southern town of Khan Younis.

About 40 people have now died in 10 days of Israeli bombings in Gaza, which Israel says is aimed at stopping rocket attacks on its territory by militants.

The latest strikes came as Israeli troops detained a second Hamas member of the Palestinian cabinet.

State Minister Wasfi Kabaha was taken from his home in the West Bank.

The arrest follows the detention on Thursday of Education Minister Nasser al-Shaer and about 30 other officials.


Most of the targets of Saturday's strikes were buildings used by the Executive Force, one of Hamas' security forces.

The four deaths occurred in Zeitoun, a district south of Gaza City where a building used by the group was destroyed by a missile, AFP news agency reported.

At least 20 people were reported to have been injured, according to Palestinian medical sources quoted by Reuters news agency.

The armed wing of Hamas confirmed that the two were among its members and were on their way to fire rockets into Israel.

But in a statement, the armed wing said it would not stop firing rockets until Israel stopped its military operations.

One Israeli civilian has been killed and 16 wounded by rockets fired into Israeli border towns, particularly Sderot, in recent days.


Mr Kabaha - who is responsible for issues relating to Israeli settlements in the West Bank - was taken from his home in Jenin early on Saturday.
His wife told Arabic TV channel al-Jazeera that the Israeli troops searched their house.

"After we opened the door, they took Wasfi's ID card and made sure he was the one they wanted," she said.

About 30 officials linked to Hamas were arrested on Thursday. Besides Mr Shaer, they include three lawmakers and three mayors.

The Israeli military at the time said the detentions were made because the officials "supported the firing of rockets".

Saeb Erekat, a senior aide to Palestinian Authority President Mahmoud Abbas, told Reuters: "We have urged the US and the EU to intervene to release the ministers and lawmakers. This step does not help to achieve calm."