Israel shows plane that can spy on Iran

The Gulfstream G550 has a range of 6,750 nautical miles (12,500 kilometres), which would enable it to stay on station for hours above Iran and elsewhere in the region. 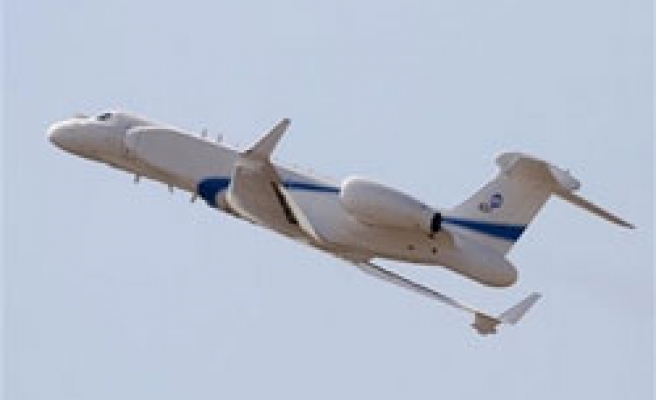 A modified business jet that could be key to any Israeli air strike on Iran went on display on Thursday ahead of its first exhibition at an international air show.

Such planes, crammed with sophisticated electronic gear, provide intelligence and communications assistance to strike aircraft and would likely play a central role in directing any Israeli attack on Iranian nuclear installations.

The twin-engine Gulfstream on display for Israel-based journalists at IAI's plant near Tel Aviv's Ben-Gurion airport bore the words "Israel Air Force" on its blue-and-white fuselage.

The Gulfstream G550 has a range of 6,750 nautical miles (12,500 kilometres), which would enable it to stay on station for hours above Iran and elsewhere in the region.

An IAI spokeswoman said the decision to display the aircraft had "no connection to the recent news" about Iran, and the timing was "completely coincidental."

The plane is to go on display next week at the Farnborough international aerospace exhibition in Britain.

Speculation that Israel could bomb Iranian nuclear installations has mounted since a big Israeli air drill in June.

Israeli Prime Minister Ehud Olmert said in a speech in Washington last month that " Iran must be stopped by all possible means."

Iran tested more missiles in the Gulf on Thursday, its state media said.