A 14-year old Palestinian girl from the village filmed the shooting incident from the window of her home. 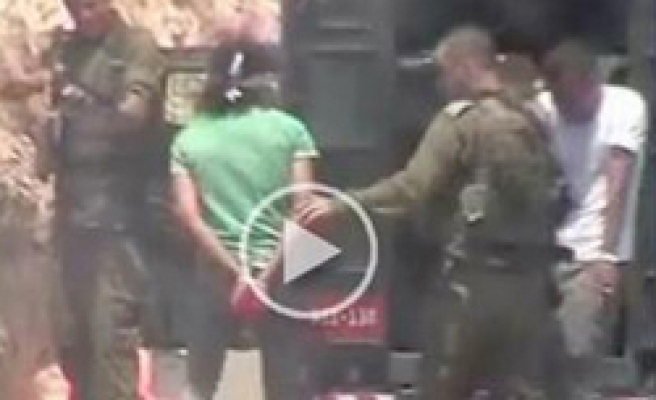 Israeli soldier fired a bound Palestinian man with rubber bullets during the demonstrations against the border fence in the West Bank village of Naalin, an Israeli website reported.

A 14-year old Palestinian girl from the village filmed the shooting incident from the window of her home, and the tape has reached Israeli website Ynet, though the first few seconds immediately following the shooting are missing.

The shooting occurred on July 7, while the village was under full closure for four days. Palestinians, left-wing activists, and international peace activists protested Israeli wall in the village.

One of the demonstrators, 27-year old Bil'in resident Ashraf Abu-Rahma, was detained for a half an hour. He was taken to a military jeep by a lieutenant-colonel on the scene. While he stood next to the jeep, one of the soldiers fired shots towards him, which Abu-Rahma says injured him in the foot.

In the film, the soldier can be seen aiming his weapon from a distance of about 1.5 meters from the bound demonstrator, and firing rubber bullets.

According to Abu-Rahma's testimony, his big toe was injured and he received treatment from a military medic on the scene, after which he was released by the soldiers.

"During the demonstration the soldiers caught me, arrested me – and after a few moments I heard shots and felt a fire in my body. I was afraid and didn't know what it was," Abu-Rahma said. The shots were fired while the officer was holding the Palestinian's arm.