Israel 'to remove' some W.Bank roadblocks: US

Israel "intends" to remove about 50 roadblocks restricting Palestinian movement in the occupied West Bank, the U.S. State Department said on Sunday during a visit by Secretary of State Condoleezza Rice. 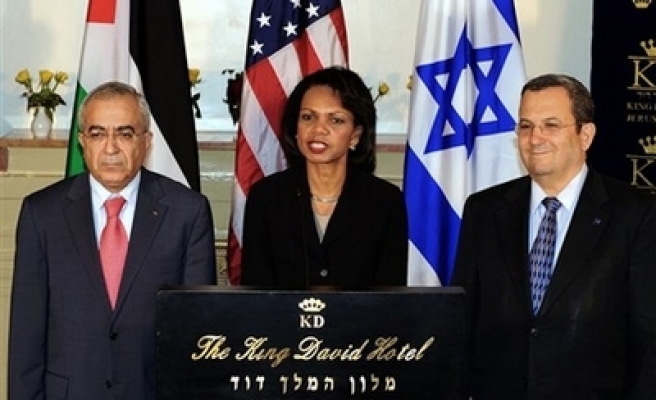 The State Department document, issued after Rice called in Jerusalem for meaningful steps to improve the lives of Palestinians, did not specify which barriers would be removed.

"Israel has pledged to reduce the impediments to access in movement in the West Bank," the document said.

"This will begin with the removal of about 50 roadblocks and immediate steps to upgrade checkpoints to reduce waiting time without compromising security."

Israel has made similar pledges in the past that it has not carried out. It maintains hundreds of checkpoints, roadblocks and other barriers -- including unmanned dirt mounds that cut off some villages from main routes -- in the West Bank.

Hundreds of members of a security force loyal to Abbas also would be allowed to deploy in the northern West Bank city of Jenin.

The officials confirmed that Israel would provide new vehicles, including armoured cars to Abbas's security services and 1,500 special permits to allow Palestinian businessmen to travel more freely in the West Bank.

Rice was on a three-day trip to the region, four months after Israel and the Palestinians launched peace talks with the goal of reaching an agreement by the end of this year.

There has been little visible progress on a deal or on steps to improve the lot of Palestinians.