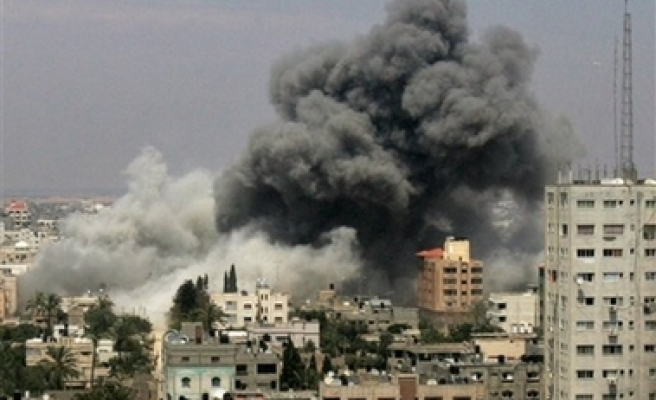 Israeli air strikes in Gaza City have destroyed several targets including a Palestinian security forces compound after threatening to respond to missiles being fired into the town of Sderot.

At least 32 people injured, including children, when an F16 fighter jet "decimated" a building used by the Executive Force.

About two hours later another missile hit a car killing a senior members of Ezzedine al-Qassam Brigades, the armed wing of Hamas, the group said.

The group has threatened to renew its suicide bombing campaign in response to the air strikes.

"This is an open war launched against Hamas. All options are open, including martyrdom operations," Abu Ubaida, the group's spokesman, said.

The first explosion sent heavy plumes of smoke into the Gaza sky, destroying the structure and several other around it and sending terrified residents scurrying.

The attack came shortly after Mahmoud Abbas, the Palestinian president, cancelled a visit to Gaza for talks on the ceasefire between political factions in the territory.

Abbas had been due to travel to Gaza to meet Ismail Haniya, the Palestinian prime minister.

Meanwhile, a truce agreed between Hamas and Fatah - their fourth in as many days - was generally holding despite some sporadic violence.

At least one Palestinian was killed an 11 injured in factional fighting in Rafah.
Fatah said at least five of its men were also abducted by its rival group. Hamas said a member had been critically wounded in an early morning shooting.

The clashes have shaken the two-month-old Palestinian unity cabinet and raised fears of a full-blown civil war and sparked international concern.

Three previous ceasefires collapsed within hours since the violence first flared on Sunday.

His bodyguards returned fire and the gunmen ran off. Nobody was injured.

The bloodshed has sent terrified Gaza residents cowering indoors, adding to the chaos in the territory already reeling from an economic aid boycott imposed after Hamas first came to power last year.

The fighting has also threatened to torpedo recent efforts to revive Middle East peace talks that have been stalled for six years.

Forty-three people, the vast majority of them Fatah loyalists, have been killed since Sunday. The toll has included two civilians, with more than 100 people wounded.