On July 9, 2004, the World Court in The Hague ruled that Israel's construction of its proposed 720-km (430-mile) wall on occupied Palestinian land was illegal. 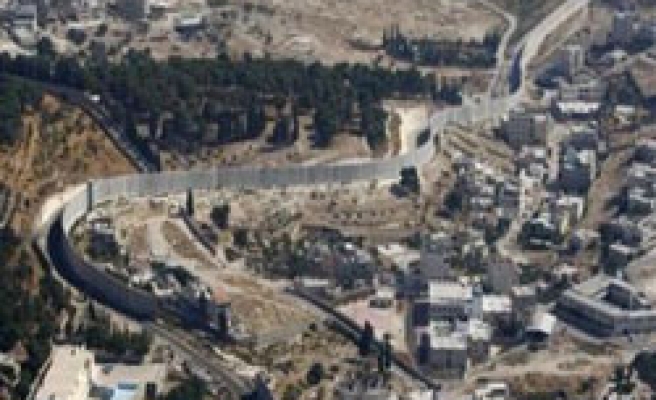 Palestinian farmer Suleiman Hussein peers through the electrified barbed wire fence that snakes around three sides of his home and points to the olive trees he once tended.

'It makes me feel sick,' he mutters, retreating as a bulldozer rumbles past on the other side of Israel's West Bank wall, about 25 metres (yards) from Hussein's home near the village of Bilin, its driver checking for holes or tunnels.

On July 9, 2004, the World Court in The Hague ruled that Israel's construction of its proposed 720-km (430-mile) wall on occupied Palestinian land was illegal.

The United Nations says Israel has ignored that ruling. So does Hussein.

Israel began building the section of the wall that virtually encircles his modest concrete home, separating it from his family farmland, three and a half years ago, he says.

It has not been moved, despite an Israeli Supreme Court ruling last September that part of it should be re-routed to circumvent agricultural land belonging to residents of Bilin, which lies about 25 km (15 miles) east of Tel Aviv.

Palestinians call it a land grab which loops around Jewish settlements and slices through swathes of Palestinian farmland.

At Bilin, it curves 3 km (2 miles) inside the Green Line, established by a 1949 ceasefire, which divides Israel and the West Bank -- it does so to ensure Jewish settlements, including Modiin Illit, lie on the Israeli side of the wall..

'This is not about a wall, it's about land,' said Hussein, 76, angrily jabbing his finger toward the barrier. 'They say it's about security, but are my olives and goats really a security threat? They just want to steal our land.'

Last week, clashes erupted outside Hussein's house. A pile of tear gas canisters lay in his garden and the soil was black where soldiers razed several trees.

'Gas bomb,' says his granddaughter Mayadah, a toddler, pointing at one. Who fired it? 'Army', she replies.

Protesters have in recent months taken their fight to the nearby town of Nilin, hoping to prevent construction of another section of the wall. The army has kept the town under curfew for four days.

Palestinian President Mahmoud Abbas hopes the West Bank will form the main part of a future state. But activists say the wall and dozens of fortified Jewish settlements are carving it into scattered 'bantustans', like areas set aside for blacks in apartheid South Africa, and undermining hopes for peace.

'What we are seeing on the ground is ghettos for the Palestinian people,' said Jamal Juma, campaign coordinator for the Stop the Wall group. 'They are making peace impossible.'