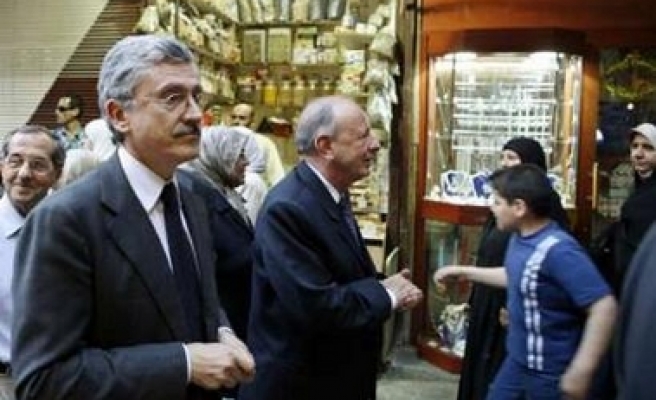 D'Alema made the call while speaking to reporters upon his arrival at Damascus international airport for an official visit, during which he would discuss with the Syrian leaders the latest developments in the region, particularly the situation in Lebanon.

"We will talk on Lebanon, Middle East and the Palestinian issue because we are in a very delicate moment and we have to strengthen our cooperation for peace," D'Alema told the reporters.

"I think that we have very good bilateral relations. We can improve and strengthen our cooperation," the Italian top diplomat said at the start of a two-nation tour which will also take him to Lebanon.

During the talks, the issue of an international tribunal, adopted by the UN Security Council recently, to try suspects in the 2005 assassination of Lebanese ex-premier Rafik Hariri was expected to be focused, local media reports said.

D'Alema's visit to Damascus came after his remarks on Hariri tribunal in a Group of Eight meeting of foreign ministers last week, during which he had reportedly told his counterparts that Syria should be reassured that such a tribunal would not be used to target its government.

The court would serve to reiterate Lebanon's independence and it must be explained to Syria that the decision to create the tribunal was not a decision against Syria, D'Alema said, stating that "the time has come to talk to Damascus and I will do so myself."

D'Alema has also insisted on the need for UN resolution 1701 to be respected, particularly in connection with alleged arms smuggling on the Syrian-Lebanese border.

The 15-member UN Security Council narrowly adopted a resolution last week, with 10 members voted in favor and five abstained, to set up the Hariri court which invokes Chapter 7 of the UN Charter to enforce its establishment. Italy, a non-permanent member of the Security Council, voted for the resolution.

Syria has already announced that it will not cooperate with the tribunal if it infringes upon its sovereignty.

A UN probe has implicated senior Syrian and Lebanese officials in Hariri's killing, but Damascus denied any involvement.

Syria also insists on trying any Syrians at home if they were involved and it has also objected the move to set up the tribunal before the UN commission ended its inquiry into the killing. Last Mod: 05 Haziran 2007, 01:05
Add Comment