Tens of thousands of people rallied to tell Italy that they alone should be counted as families, pressuring parliament to reject legislation that would grant new rights to unmarried and same-sex couples. 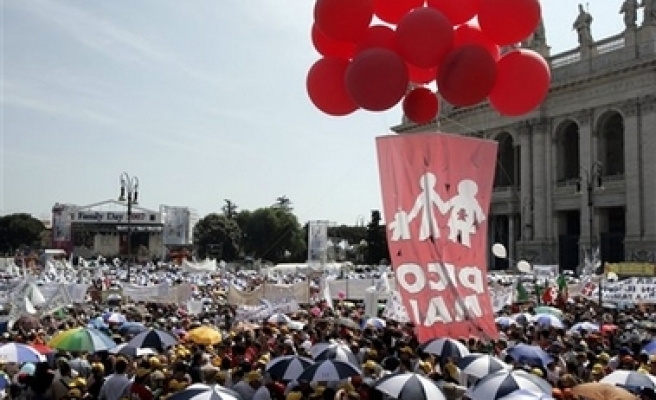 Tens of thousands of people rallied to tell Italy that they alone should be counted as families, pressuring parliament to reject legislation that would grant new rights to unmarried and same-sex couples.

The "Family Day" rally, drawing hundreds of thousands of demonstrators in an unexpectedly strong outpouring, was organized by lay Catholic groups and family associations.

"With this demonstration, we wanted to give a signal. It must not be a sporadic event, but it must contribute to dialogue and help (people) understand family must be protected," said Emanuele Cirillo, a 27-year-old Neapolitan who had traveled to Rome for the demonstration.

People from across Italy began pouring into the massive St. John Lateran piazza in the morning. The demonstrators were entertained by singers, speakers and even a brief video featuring the late John Paul II, the beloved pontiff who died in 2005, in a 1988 speech about the need to protect family.

By the end of the day, organizers said as many as 1.5 million people had showed up, while police did not give a final estimate. Earlier, police had put the number of participants at 250,000 but the crowd became bigger.

The turnout was above the organizers' expectations.

Premier Romano Prodi's Cabinet passed the legislation at the center of the debate last February, and the bill now requires parliamentary approval.

The proposed legislation would grant legal rights to unmarried couples who live together, including hospital visits and inheritance. It does not legalize gay marriage, as was done in other European countries, such as Spain.

The bill has angered the Vatican, which under Pope Benedict XVI has campaigned to protect traditional family based on marriage between man and woman.

Benedict, speaking on the eve of the rally from Brazil, where he was traveling, accused the media of promoting sexual immorality. He also decried what he called the "plague" of extramarital unions.

The bill's critics say the legislation would dismantle the traditional family by offering an alternative model. Supporters argue that the bill would make Italy a more civilized nation by recognizing the basic rights of people who live outside marriage, and organized a counter-rally in Rome. Organizers said 10,000 attended the counter-demonstration.

The "Family Day" has proven embarrassing for Prodi's center-left coalition, with at least two ministers taking part, while other center-leaders attended the counter-demonstration.

Prodi tried to defuse tensions Saturday, saying that religion should not be manipulated and calling secularism an "essential principle" of politics.