The deployment, which will soon rise to 3,000 troops, was the most visible initiative so far in a law-and-order campaign by the conservative leader elected in April pledging to make the country safer. 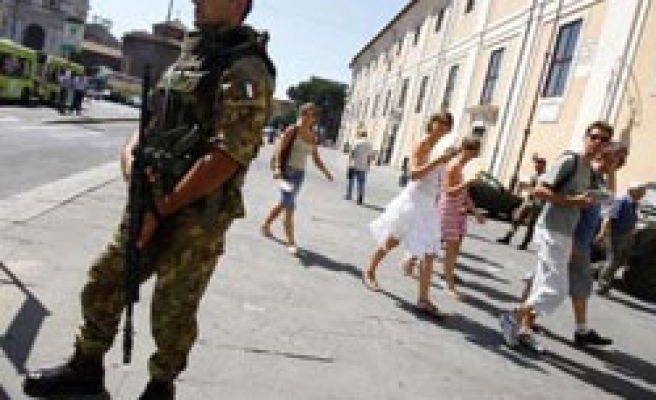 Hundreds of troops fanned out across Italy on Monday to help police fight crime on orders from Prime Minister Silvio Berlusconi, an unorthodox use of the armed forces dismissed by critics as a purely symbolic gesture.

The deployment, which will soon rise to 3,000 troops, was the most visible initiative so far in a law-and-order campaign by the conservative leader elected in April pledging to make the country safer.

Members of the armed forces were sent to cities including Rome, Milan, Turin and Palermo with tasks like patrolling streets along with police and helping to protect "sensitive" sites, ranging from Milan's Duomo cathedral to embassies and consulates.

They will also guard detention centres processing illegal immigrants, blamed by the government for much of Italy's crime.

"I'm happy. I hope this will solve things and eliminate part of the crime," said Rome resident Vittoria Rosati, as troops clad in camouflage stood guard at a nearby metro stop. Visitors to the eternal city will not see them outside iconic monuments like the Colosseum or Pantheon, after Rome's mayor complained that gun-toting soldiers could scare off tourists.

Some critics said the deployment of a token force of 3,000 troops would do little, if anything, to reduce crime, while others objected to the use of the military for policing at home.

Achille Serra, a former Rome prefect with a long background in law enforcement, called the deployment "useless and ineffective". He is now a centre-left senator in the opposition.

"I'll remind you that we're not in Beirut. And I'm wondering what a soldier will do to address a burglary or mugging," he said in a newspaper interview.

Italy's military is currently deployed overseas in places like Beirut and Afghanistan. But the armed forces have taken on domestic security roles in the past, including to address mafia violence in Sicily after the 1992 killings of anti-Mafia magistrates Paolo Borsellino and Giovanni Falcone.

"It's clear that this time their support to the police forces will be less, basically symbolic," he told La Repubblica daily.

Still, Milan's current prefect applauded the use of troops that he said would free up police, and the mayor of the southern city of Bari called the deployment "reassuring" to citizens.

But the government's handling of immigration and minority issues -- particularly regarding Roma people -- has sparked criticism from the Vatican, human rights groups and some European bodies over fears it could stoke xenophobia.