Japan's prime minister has called for a bold review of the country's post-war pacifist constitution to open a "new era" in the country's history. 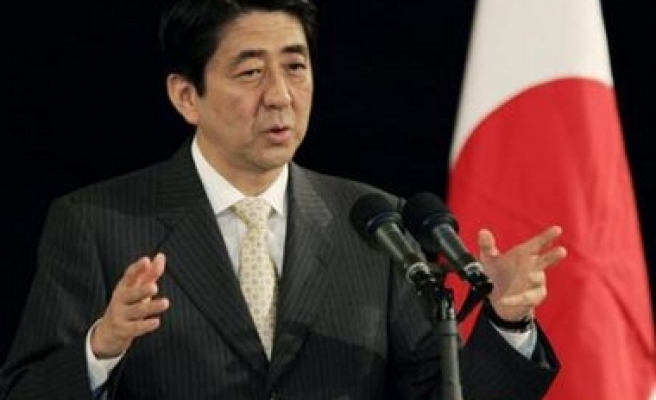 Japan's prime minister has called for a bold review of the country's post-war pacifist constitution to open a "new era" in the country's history.

Shinzo Abe marked the 60th anniversary of the charter on Thursday by calling for amendments to allow Japan to take a larger role in international security and foster a revival of national pride.

"A bold review of Japan's post-war stance and an in-depth discussion of the constitution for a 'new Japan' is necessary ... to open up a new era,'' he said in a statement on Thursday.

He was determined, he said, to work "towards a Japan that instils confidence and pride among its children".

The statement came at the end of a five nation tour of the Middle East, during which Abe told politicians Japan was prepared to become actively involved in the region, both economically and politically.

Overhauling the constitution, written by US occupation forces after World War II, is one of Abe's top political goals.

The 1947 constitution, which bans military force in settling international disputes and prohibits maintaining a military for warfare, has never been altered.

While several polls suggest substantial support for some changes to the document, one survey this week showed far more opposition than support for changing the key article nine of the constitution which lays out the pacifist stance.

The Mainichi Shimbun and Nikkei newspapers said 51 per cent of those surveyed supported changing the constitution, the first time more than half supported a change.

But in a poll published on Wednesday by the Asahi Shimbun, 49 per cent of respondents said they would prefer to keep the pacifist clause unchanged, with only 33 per cent in favour of altering it.

In a drive that began under Junichiro Koizumi, Abe's predecessor as prime minister, the government has been pushing for changes that would remove some restrictions on Japan's military, including clearly recognising the country's right to have a standing army.

Under article nine of the constitution Japan abandoned the right to wage war or maintain a military.

However, the limits of the article have already been stretched with the government interpreting its pacifist clauses to mean the country can have armed troops to protect itself, allowing the existence of its 240,000-strong Self-Defence Forces.

According to figures from globalsecurity.org, Japan has the world's sixth biggest defence expenditure, with a military budget of $41.75 bn in 2007.

Japanese soldiers were sent to Iraq between 2004 and 2006, and its tankers refuel allies' warships in the Indian ocean in support of US-led operations in Afghanistan.

Abe has also talked of reviewing a self-imposed ban on defending an ally under attack, which he said was preventing Tokyo from playing a greater security role overseas and forging an equal partnership with the US.

But obstacles remain to constitutional reform.

Japan would need to allay the fears of neighbours such as China and South Korea, which suffered under Japanese militarism in the last century.

Many there still harbour bitter feelings toward Tokyo's wartime conduct and would be suspicious of any moves that hint at a military revival in Japan.

Many Japanese credit the charter's pacifist clause with keeping the country out of war since 1945 and focusing on economic development. Last Mod: 03 Mayıs 2007, 10:34
Add Comment