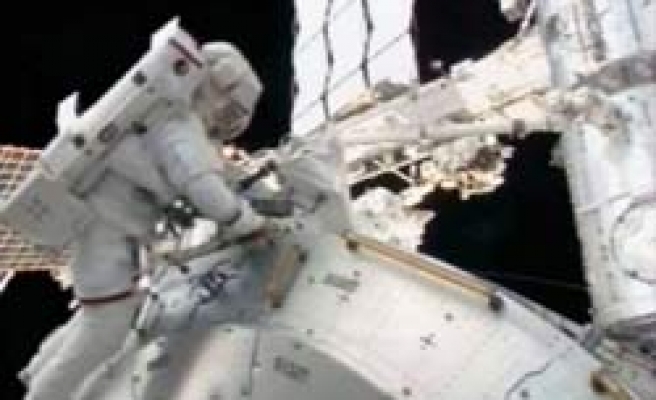 A key component of a huge new orbital research laboratory was installed by spacewalking astronauts on Friday, launching construction of Japan's signature contribution to the International Space Station.

Wearing protective masks and goggles, station commander Peggy Whitson, Japanese astronaut Takao Doi and lead shuttle spacewalker Richard Linnehan floated into an equipment-jammed storage closet that will be hooked up in May with Japan's main laboratory, named Kibo, or 'hope.'

THIS IS A SMALL STEP

'This is a small step for one Japanese astronaut, but a giant entrance for Japan to a greater and newer space program. Congratulations,' Doi radioed to the Japan's new space control center outside Tokyo.

The cylinder is basically a storage compartment for the main segment of the three-piece Kibo, scheduled for delivery on a May space shuttle flight. The final piece will be flown up in early 2009.

'You are our 'kibo'-our hope,' said Japan's Mission Control commentator. Upon completion, Kibo, will be about the size of a double-decker bus and the station's largest lab.

NASA is aiming to complete construction of the space station-now about 60 percent finished-by 2010 when the aging space shuttle fleet will be retired.

The opening of Kibo marks the first time in the 10 years of space station construction that equipment from all 15 partner nations is operating together in orbit.

Shortly after the opening of Kibo, NASA restored power a Canadian robotic system delivered to the station by the shuttle along with the first segment of Japan's lab.

A design flaw in an electrical circuit had left the $209 million robot, dubbed Dextre, without heaters to protect its systems from the minus 200 degrees F (-128.88C) temperatures of space.

The robot is designed to add manual dexterity and another 30 feet of reach to the space station's crane to assist with detailed exterior maintenance tasks.

'There was a design problem,' said LeRoy Cain, head of NASA's shuttle mission management team. 'It was not done the way it should have been done.'

Engineers attempted to fix the problem with a software patch, but later discovered a hardware error was to blame. The next step was to have the shuttle crew plug in the robot to an electrical connection on the station's crane instead.

The 1.5 tonne Dextre, brought up in nine pieces, was to be assembled during spacewalks on Saturday and Monday.

Shortly after 9 p.m. EDT (0100 GMT Saturday), Mission Control in Houston told the crew that power to Dextre was flowing. 'That is good news,' said Whitson.

The Endeavour crew, which reached the station on Wednesday, plans to conduct five spacewalks during their 12-day construction and servicing call to the station.

The shuttle blasted off from the Kennedy Space Center in Florida on Tuesday and is scheduled to land on March 26.