Radical Jewish settlers are surrounded by more than 1,200 soldiers, who protect them but do little to curb violence against Palestinians, according to human rights groups. 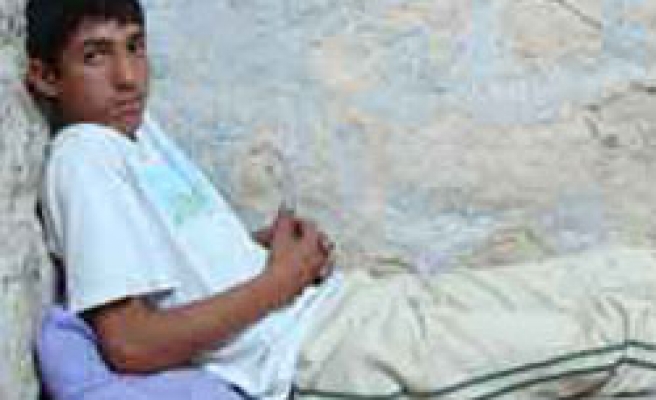 A hardline group of Jewish kicked and beated a Palestinion boy in Al-Halil, Times Online said on Wednesday.

Time Online said that "When a group of Jewish settlers came down the street towards them in the old city centre of Hebron, Hamza Abu Khetar's friends fled from the house that they were renovating. Hamza, a slim, 14-year-old Palestinian boy, was working on the roof of the empty, four-storey building and did not see the threat. It was a Saturday afternoon, the end of Sabbath, a time when, according to Palestinians and Israeli human rights workers, the hardline settlers of Hebron often go on the rampage."

"They pushed me over the edge of the roof," Hamza said. "They meant to kill me." A lower roof broke his fall, but Hamza broke the bones in one foot and twisted the other ankle. He was in great pain in his stomach, back and legs when his family found him. Despite his agony, Israeli soldiers kept the Palestinian ambulance waiting at a checkpoint for 90 minutes because the attack happened in an area where only Israeli vehicles are allowed to drive, his father, Sufian, said.

"Beatings of Palestinians by radical religious settlers, protected by the Israeli army and police, are a common occurrence in this dangerous city, where Jewish settlements nudge into the heart of a community of about 120,000 Arabs. What happened next was shocking even by the violent standards of Hebron however." added Time Online.

"They consider us nothing more than mosquitoes, not human beings, as though we didn't exist," Hamza's father said.

Radical Jews are surrounded by more than 1,200 soldiers, who protect them but do little to curb violence against Palestinians, according to human rights groups. Near the city centre another large settlement, Kiryat Arba, cuts close to the heart of the city. Most Palestinian residents have fled the desolate centre.