The four suspects in an alleged terror plot to bomb a New York airport were set up in an elabourate plan by the US Republican party to retain hold of the White House, the daughter of an arrested suspect claimed. 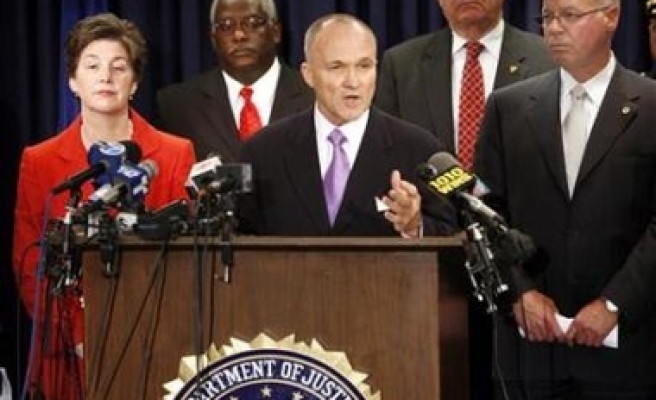 The four suspects in an alleged terror plot to bomb a New York airport were set up in an elabourate plan by the US Republican party to retain hold of the White House, the daughter of an arrested suspect claimed on Tuesday.

Huda Ibrahiim, daughter of Amir Kareem Ibrahiim, one of four men accused of plotting acts of terrorism against the United States, said US justice officials had engaged in entrapment in breaking up the alleged plot.

Huda, 20, speaking on behalf of the Trinidad and Tobago and the Guyanese Shiite Muslim community, read from a prepared statement in a press conference at a hotel here.

She said the Federal Bureau of Investigation (FBI) informant key to breaking up the alleged plot had presented himself as an Islamic missionary from the United States while visiting the homes of Abdul Kadir and Amir Ibrahiim.

The FBI’s informant, whom she called “the source,” ”is the only person culpable of any of the activities mentioned in the complaint.

“The source visited our brothers with the specific intent to entrap them in activities they know nothing about, never agreed to and did not participate in,” said Huda.

Ibrahiim, a Trinidadian, and Kadir appeared in Trinidad court on Monday while Nur gave himself up to local authorities yesterday. All three men are facing extradition to the US where De Frietas has already been arraigned.

“We believe that the persons responsible for the arrest of our brothers are doing it for a purpose other than the protection of the people and interests of the USA,” Huda said.

“They have apparently done so in the interest of shoring up a lame duck presidency and increasing the lame chances of the Republican party being returned to power in November 2008”, said Huda, whose father is a retired government accounts clerk.

She insisted Ibrahiim barely knew two of the suspects.

“Mr. Kadir and Mr. Ibrahiim have known each other for more than 20 years and there are good and cordial relationships between the Shia communities in T&T (Trinidad and Tobago) and Guyana.

“Mr. Ibrahiim did not know Mr. Russell De Freitas nor Mr. Abdul Nur prior to Mr. De Freitas’ and Mr. Abdul Nur’s visit to his home in Trinidad about three weeks ago.”

She also said her father was afraid to fly, was not computer literate and does not use the Internet.

“We are absolutely sure of their innocence. Neither of these men and we believe no one in our community participates in activities as those alleged in the public statements or in the filed complaint of the Department of Justice”, she said.

As believers in Islamic Sharia, they followed the cardinal principles of the Koran, she said, including the principle that the blood of civilians is sacred.

“To our Muslim brothers and sisters we swear by Allah, the Lord of Muhammad, that we have not participated in any terrorist plot against the United States,” she added. Last Mod: 06 Haziran 2007, 18:11
Add Comment