A Palestinian group which kidnapped the BBC's Gaza correspondent in March has posted a new video on the internet showing him strapped with an apparent explosives belt. 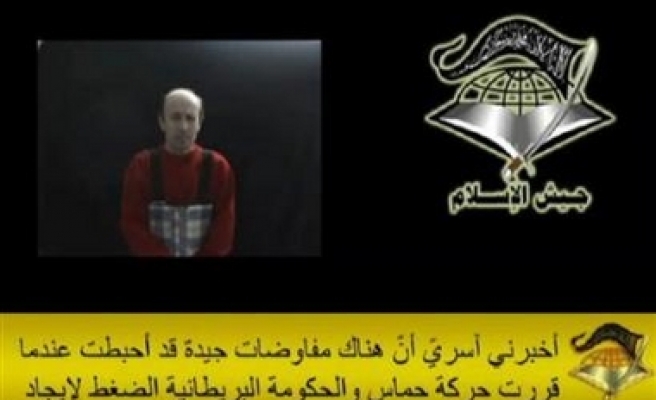 A Palestinian group which kidnapped the BBC's Gaza correspondent in March has posted a new video on the internet showing him strapped with an apparent explosives belt.

Alan Johnston reportedly said in the video on Sunday that his captors, who call themselves the Army of Islam, had threatened to blow him up if force was used to try to free him.

"The situation now is very serious as you can see I have been dressed in what is an explosive belt which the kidnappers say will be detonated if there was any attempt to storm this area," Johnston said.

Ismail Haniya, the deposed Palestinian prime minister from Hamas, said on Sunday the British government had requested not to use force in the rescue.

"We will not allow the continuation of the abduction of the British journalist. The issue of Alan Johnston must end," Haniya added.

The BBC said Hamas had set Monday as the new deadline for Johnston's release.

A Palestinian source close to the negotiations confirmed the existence of a new tape showing Johnston wearing an explosives belt.

Johnston, 45, appeared wearing a white and blue belt around his torso with black shoulder straps over a dark red sweater in the undated video filmed against a black background, he said.

Looking tired but unharmed, he said negotiations for his release were thwarted by what his captors told him was a plan by Britain and Palestinian group Hamas to use force.

"Captors tell me that very promising negotiations were ruined when the Hamas movement and the British government decided to press for a military solution to this kidnapping," he said in the video of less than two minutes.

"I do appeal to the Hamas movement and the British government not, not to resort to the tactics of force in an effort to end this.

"I would ask the BBC and anyone in Britain who wishes me well to support me in that appeal. It seems the answer is to return to negotiations, which I'm told are very close to achieving a deal."

The only other known video of Johnston, released on June 1, showed him wearing a baggy red sweater saying he was in good health and being treated well.

A man identified as a spokesman for the group recently told Al Jazeera television that Johnston might be killed.