A 12 century key to the Kaaba in Mecca, Saudi Arabia, the holiest site in Islam, sold for 9.2 million pounds ($18.1 million) late on Wednesday, setting a new record for an Islamic work of art at auction. 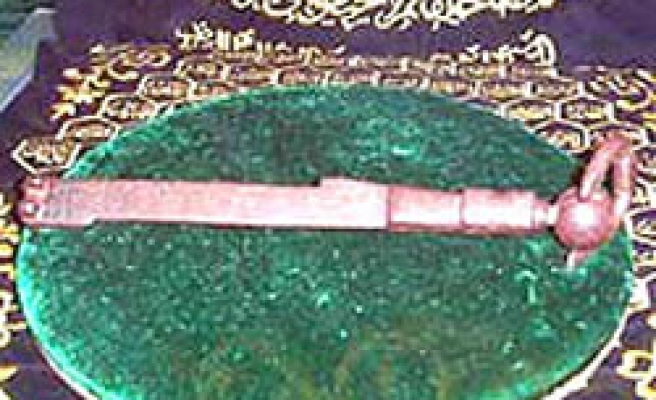 The Abbasid period key, made of iron and measuring 37 cm long, sold at Sotheby's in London for more than 18 times its pre-sale estimate and was bought anonymously. It is the only known example to remain in private hands.

The key is engraved with the words: "This is what was made for the Holy House of God during the time of the Imam son of Imam al-Muqtadi Abu Ja'far al-Mustansir Abu'l-Abbas 573."

It was the highlight of the auctioneer's Islamic sale, which realised 21.5 million pounds, in excess of the pre-sale high estimate of 13.1 million pounds and a new record for an Islamic art auction.

The previous record for a work of Islamic art sold at auction is believed to be a bronze fountainhead in the form of a hind dating from mid-10th century Spain. It sold at Christie's in 1997 for 3.6 million pounds.

On Tuesday, Christie's held its own London Islamic sale which fetched 11.8 million pounds, including a leaf from a mid-seventh century copy of the Holy Koran sold for 2.5 million pounds versus a pre-sale estimate of 100-150,000 pounds.

It was a new world auction record for an Islamic manuscript, the company said.

In addition to the example sold at Sotheby's this week, there are 58 recorded Kaaba keys, all of which are held in museums.

Sotheby's called the Kaaba key "arguably one of the most important symbols of Islam". According to the auctioneer, the tradition of dedicating the key to each caliph appears to have originated with the Abbasid caliphs in Baghdad.

"As a physical object -- the key to the holiest building of an entire religion -- it demonstrates the authority of the caliph and is the ultimate emblem of power," Sotheby's said.

The Kaaba is the ancient cubic shrine which all Muslims face when they perform their daily prayers, and is located at the centre of the Grand Mosque in Mecca.